2020 comes staggering to a close. In Greater Manchester we’ve moved into tier 4, which might as well be lockdown.

It’s very cold but, in a strange reversal of the normal run of things, we have almost no snow while friends in other parts of Greater Manchester are raving about how nice their gardens look in the white stuff.

For the first time in twenty years we will not be seeing in the New Year at a friend’s house. Twenty years ago we celebrated his fiftieth birthday on Millennium Eve. After he died a few years ago we carried on, a bunch of friends getting together and drinking a glass to his memory. And along comes Covid-19 and tier 4 ... and the rest is lockdown! 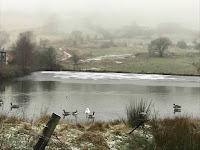 So this morning I got up and ran round the village, a very quiet village, with amazingly few dog-walkers about even. The pavements were remarkably clear and un-slippery. The first millpond was half frozen and the hills were shrouded in fog. I just missed what might have been a fabulous photo of the heron taking off, reflected in the millpond; by the time I had my phone camera organised the moment was past! 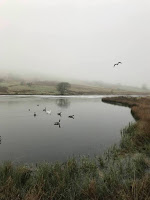 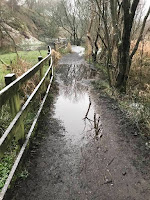 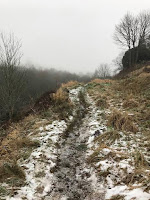 So, reluctantly, I backtracked and eventually took the top path. Not one to run, this path, even though the churned-up muddy surface was not quite so soggy as it might have been, thanks to a bit of freezing. It was still mud-slippery in places and in the final stages turns into a deepish channel, maybe two feet wide and three inches deep, with occasional roots and large stones strategically placed to trip up a careless walker or runner. Even picking my way with care I slightly turned my ankle at one point.

I did get some nice pictures looking down on the millpond though. 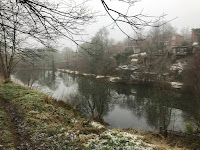 And so here we are in our tier 4, all of us wondering what we can and cannot do. I can go for walks with my daughter but not if Phil comes along. Or she can meet her oldest offspring, the one who lives independently, but not if the teenagers go with her, and she can’t drive her here to go for a walk with Phil and me. And do her two smaller children count to the total of who can meet outdoors? Bang go the family adventures and Diggle Chippy Hikes for a while.

We wait to see what happens with the vaccination programme.

And as regards schools, well that all sounds a little chaotic. By the sound of things or exam-year grandchildren -one GCSE and one A-Level - should be back in school on Monday 11th of January. Our daughter should be back teaching her primary school class on Monday 4th. But between today and Monday all sorts of decisions could be taken.

Mr Johnson is celebrating having got his deal thorough Parliament. Some people are proposing a minute’s silence at 11.00 this evening, which is midnight in most of Europe and so we leave the EU. Here is a link to a flashmob playing Ode to Joy in Sabadell, Catalonia, justbto cheer us all up.

Moving on to other things, I read about the pop group East 17’s Tony Mortimer discovering the joy of reading during the pandemic. Until lockdown he had never managed to read a whole book, having had all sorts of problems at school. But stuck indoors he persevered and found a whole new world opened up for him. He’s apparently got through 70 books since then. He’s even taken to writing one himself. Now, I found this next bit of his story rather telling:-

“Mortimer is especially proud of his year of reading and writing because of where he’s come from: a working-class kid from east London, he was sent to handwriting classes as a young boy because his parents wanted to switch him from left- to right-handed. “I had to learn to control my letters and write all over again,” he says. “I was so messy. So there’s an irony in me becoming a writer. I hope it sets an example: don’t ever let anyone tell you that you can’t write.””

And I thought people had long since given up messing with children’s head by insisting that being left-handed was somehow wrong. No wonder he had problems!