Mostly weather related, but some Christmas card stuff as well.

Well, December is excelling itself for variety of weather. The first of December was crisp and cold with blue sky and sunshine, the second was soggy with occasional dry spells, the third was dull and damp and grey, and today, the fourth, we have sleety snow.

It was dry(ish) when I ran round the village first thing but there was snow on the hills. 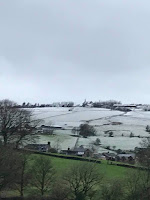 By mid-morning the sleet had begun to fall and by late morning the garden was looking quite white. 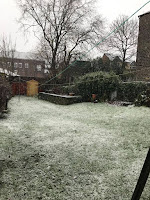 It wasn’t sticking on the road though. However, there is no knowing what conditions will be like later. 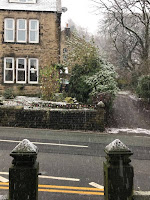 We had tentative plans to go adventuring again. My brother-in-law had proposed another Diggle Chippy Hike but at about the time he would have been setting off to come here it was sleety/snowy enough for us to have second thoughts. The chippy will presumably still be there next week. And besides, our daughter was not able to come today as she is waiting hear about the results of a Covid test for one of the the children in her school class. This adventure was not destined to happen today.

It all looks very Christmas-card-like out there. We have already started to receive cards, only two so far but it is  a bit early. Another case of people trying to make themselves feel more festive, and less restricted, by getting on with Christmas activities a little earlier this year.

Christmas cards have not been around forever, at least not commercially produced ones. A dealer in rare books and manuscripts has put up for sale online one of the few remaining copies, maybe the only remaining copy, of the first commercially produced card. It shows an English family drinking a toast with red wine, wishing everyone A Merry Christmas and a Happy New Year.  Unfortunately one of the family is a a very young girl, happily sipping away at an adult’s glass of wine. This caused a bit of a scandal when it was produced in 1843. The Temperance Society kicked up such a fuss that it was another three years before another Christmas card was produced!!

Maybe the family felt wine was better for the child than water. After all the water supply was not always reliably healthy at the time. Ale was a healthier drink that water. And attitudes to children being given a taste of wine have changed quite significantly. I remember being rather shocked, maybe only 15 years ago, to see a Spanish gentleman with his large glass of red wine in the middle of the morning. It was not the gentleman himself - if he wanted to drink red wine in the morning that was his business - but the arrival of his grandson, aged about seven by the look of him, who greeted his grandfather cheerily and then picked up the glass of wine and helped himself to a hearty slug. Grandfather beamed benevolently! As I say, it was probably only 15 years ago, certainly not more than 20, but I doubt it would happen nowadays.

As regards the snowy weather, we have perhaps got off lightly. I read that people in Edinburgh were woken up in the wee small hours by what they thought might be an explosion or a plane crash or maybe a building collapsing. It turned out to be something called  “thundersnow”, which happens when thunderstorms form in wintry conditions. According to the Met Office thundersnow is unusual because it can happen only in a few months of the year. “When thundersnow occurs at night the lightning appears brighter–- this is because the light reflects off the snowflakes.

Interestingly, the snow contained within the thunderstorm acts to dampen the sound of the thunder. While the thunder from a typical thunderstorm might be heard many miles away, the thunder during a thundersnow event will only be heard if you are within two to three miles of the lightning”.

But the writer Ian Rankin was disappointed because he slept through it. He tweeted that he was “gutted”.

We know that feeling. We once slept through fire engines arriving to extinguish a fire in a small factory near the house we lived in at the time. All the neighbours had been out watching what was going on but we slept on unawares. We felt a little cheated somehow!