Chess superheroes! Daft or dangerous activities! Reports on weather and on the Donkey Line! Vaccine!

Everyone seems to have been going a bit bonkers about the Netflix series The Queen’s gambit. In case you needed further confirmation that chess is not just for nerds, I came across a report of someone who was rescued from the Thames by a couple of chess players. They saw him jump in from Tower Bridge - not an advisable thing to do - the sheer height of the jump - currents to carry you away - cold water - obstacles in the water to bump your head on - all that sort of thing. One of the young men who saved the jumper is a regular outdoor swimmer - another rather dubious pastime in my opinion but one I keep hearing more about, indeed I keep hearing it recommended as a good stress and anxiety reliever - took off his shoes and jumped in to save him. His friend joined in the rescue and they got him out. It turned out he was wearing a wet suit under his ordinary clothes and was filming the stunt. So, another kind of crazy! I hope he had the grace to thank his rescuers. As for his rescuers, well, they were on hand because they meet besides the Thames once a week to play chess. Chess playing superheroes!

(Side note: I have come across some pretty nerdy chess players in my time though!)

So, there are two difficult-to-comprehend activities mentioned in what I have just written: jumping into the Thames from Tower Bridge, especially if you do so just to film it, and open air swimming, sometimes called wild swimming. I have nothing against open air swimming in open air swimming pools, by the way. Indeed, it’s my favourite kind of swimming, so long as there are not too many crazy kids jumping in every few minutes. It’s the idea of unsupervised swimming in lakes and rivers that freaks me out a little. Even swimming in the sea, which is wonderful, makes me a little nervous as I am always concerned that I might not find my stuff on the beach when I get out, (a) because I have been carried a little too far by the tide or (b) because some joker/rascal/thief might have walked off with it.

A friend just posted footage on Facebook of another activity that I find hard to understand: stunt cycling. The video clip was ostensibly to show that even good stunt cyclists can fall off their bikes but it also showed the cyclist riding on the very top of walls, jumping his bike from one narrow surface to another, going up ramps and doing not just wheelies but somersaults on his bike. This was a grown man, by the way! Why do grown men need to prove that they are in touch with their inner 12 year old? You see it with skateboarding too. Yes, I know there ARE girl skate boarders and mountain bikers and stunt cyclists but mostly it’s boys and men who don’t want to grow up who indulge in such pastimes!

For a bit of balance, here’s a bit of criticism of girls. Is it really true, CAN it really be true that young women want a new outfit every time they go out? As they discussed the collapse of Debenhams on the news yesterday, a 25 year old influencer said that the store’s demise was predictable as they did not cater for young women who wanted cheap, disposable clothing. Wow! It seems that, like princesses going to balls, they do not want to be seen in the same outfit twice. The current queen of Spain, Letizia, by the way, has been criticised more than once or twice in the Spanish press for that very social gaffe!  But most young women cannot afford the sort of clothes real princesses buy and so they seek cheaper outlets than shops such as Debenhams. Goodness, don’t modern girls ever have favourite outfits? And what do they do with the clothes they have worn once only? Do they just throw them away? I had heard of it happening on Instagram: people “buying” clothes, putting them on for a selfie, posting it on Instagram, and then sending the clothes back to the supplier. I didn’t know this went on with clothes that you wear for a whole evening though!

Young people are a foreign country!

Before that Phil and I went for a walk in the crisp winter sunshine. December was getting off to a good start. We walked up the hill to Dobcross, down the other side and back home along the Donkey Line. The leaf-blowing men from last week had made the surface less squelchy overall, although there were still occasional puddles. 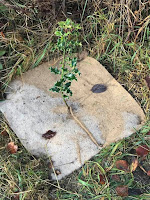 Along the way we spotted tiny holly bushes and twig-like things that presumably are some other sorts of trees, as yet unidentifiable. Someone has been busy re-planting sections of the path-side. Each tiny tree is surrounded by a square of sacking, presumably to protect the sapling from from being overwhelmed by other faster-growing plants. There must be a new business somewhere producing nice pieces of sacking to the correct measurements and each with a slot so that it can be safely placed around a vulnerable baby tree. The wonders of modern gardening life! 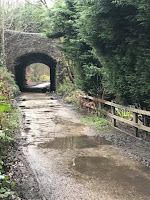 In contrast to yesterday, today is dull and wet once more, and still rather chilly. The Donkey Line still looks good even in the rain and drizzle but I was rather wet when I returned from my ride to Uppermill market. 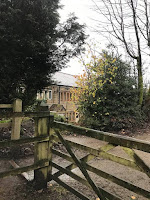 On the radio news they are talking about the imminent “roll-out” of the Covid vaccine. As early as next week? Is there light at the end of the tunnel?