Oh dear! I stand corrected! It has been pointed put to me, by someone who knows, in other words my husband, who shares the same holiday memories, that when I wrote about the 1812 overture yesterday I really meant Beethoven’s 5th - la pince à linge - dah dah dah daaah! This memory lapse, confusion, call it what you will, has nothing to do with old age and decrepitude. As my daughter is often quick to point out I have always been known to forget or confuse names of actors, films, writers, books, and so on. I am, however, pretty good at picking up song lyrics!

At least my mistakes and usually small and insignificant. They don’t lead to long queues of lorries on the way to ferry ports or people having to change their Christmas plans.

I read that the Spanish singer Raphael gave a concert in a venue in he Madrid region on Saturday night, attended by 5,000 people. Like Cliff Richard and the Rolling Stones, Raphael has been around forever. The concert in question was to mark his 60 years in show business. The president of the Madrid region defended the decision to go ahead with the concert despite a recent surge in Covid-19 infections; the concert had “scrupulously” adhered to Covid restrictions, which oblige venues to operate at no more than 40% of their total capacity, she said, and photos of the venue do show the audience all nicely spaced out. But even so ....

I wonder if we will ever again be able to attend crowded musical events. Maybe the summer concerts in Hyde Park in London and in Castrelos park in Vigo are a thing of the past now. We shall see. But I notice that dates for concerts and festivals are popping up. Optimism still abounds. And, goodness knows, the music industry has been suffering.

Yesterday our family adventure took us up the hill to Dobcross, accompanied by our oldest granddaughter’s new dog. 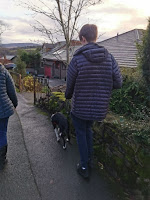 And even by the teenage grandson who seems to have rarely come out of his room in recent months except to go to the kitchen in search of food and, of course, since September to go to school. We think it was the dog who tempted him out.

There are plans afoot to have him call at his older sister’s house on his way home from school to take the dog out for regular walks. Killing several birds with one stone: big sister gets some work done in peace, younger brother gets fresh air and the dog gets exercised.

On our way down the hill from Dobcross we saw further evidence of the approach of Christmas. 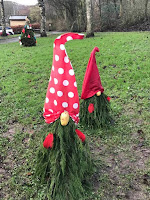 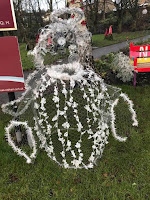 I need to start wrapping presents.

Today is dull and damp once more. I have run in the rain again this morning. We’ll see whether a window of opportunity arises for a walk up the quarry road later.