Out in the snow. Catching up and changing. 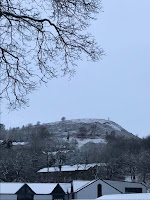 Running in the snow this morning, I thought it would be just me who was crazy enough to be out and about. But by the time I reached the crossroads, a few hundred yards, I met a former pupil from more years ago than I care to calculate, also running, with her husband and her dog. She is a much more serious runner than I am. Not only does she run faster but she takes part in marathons and wins prizes. I run quite slowly and just win my own self esteem.

There were also dog-walkers, one with a huge full-sized poodle leaping around all over the place and a much calmer tiny miniature poodle - a curious sight. And I was almost mown down by a peloton of cyclists. All right, I exaggerate somewhat, maybe not a peloton but enough to be a Tour de France team. They seemed blissfully unaware of the runner who dodged out of their way as they commandeered the width of the bridle path, all talking nineteen to the dozen. 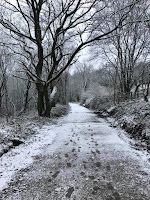 I chose to run along the Donkey Line again this morning as it does not involve any steep downhill stretches with the possibility of slipping and sliding.

It’s a good job I knew where the various puddles were on the approach to the bridle path as they were pretty much snowed over. An unsuspecting runner or walker could splosh all unawares into icy water. 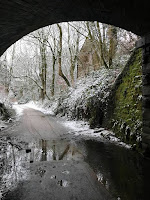 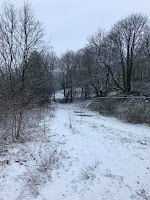 There’s a particular sound to walking on freshly fallen snow. Wet ground or piled-up soggy leaves make a dull squidge-squelch noise but fresh snow squeaks. That’s a sound you miss if you walk or run with your headphones in and your tunes playing. 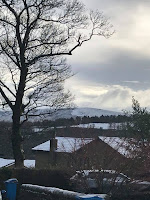 Later in the day the sun actually came out so we went for a walk up the hill to Dobcross. Sunny but chilly!  But by the time I took photos half way up the hill, the sun was behind the clouds again. We returned home with frozen faces! 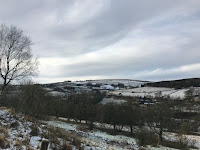 Over the last few days I have been making or receiving catch-up phone calls from my sisters. One video-called me as I walked down the road. So she shared a walk with me. That was my English sister? I called my Spanish sister later the same day. Now, that was a curious experience. She has always had very short hair but it has grown during this pandemic crisis. In addition she has lost quite a lot of weight, including off her face, and for a brief moment I thought I had called the wrong sister. We three sisters have always been recognisably siblings but never identical and suddenly my younger sister had turned into my older sister. How very strange!