Recently we’ve been watching the Covid infection rate for Greater Manchester, and particularly for our bit, Oldham, steadily going down - still high but definitely going in the right direction. Yesterday Oldham’s rate went up again. Not good! Is it a blip? Or is this the start of a new rise as “experts” talk about a mutated virus causing increases in infection rates? Whatever it is, it’s very annoying and does not bode well!

Meanwhile London’s rates have been going up and up (mutated virus?) and now London goes into Tier Three. On the radio news yesterday there was an immediate outcry from the catering industry, stating this was a disaster as all the pubs and restaurants will suffer. Some may close for ever. Jobs will be lost. This is true, but I wanted to shout at the radio, “And what about Greater Manchester?” After all, the pubs and restaurants here have been suffering those same consequences for a good while now. TV and radio news is so often London-centric, as though other parts of the country don’t suffer the same consequences of things as the capital does.

Even the weather favours the area around the capital. Well, according to our son that is the case. He went to London with a bunch of friends after graduating, all of them seeking work, most of them successful most of them still down there. Our boy says the weather in general is much better there than in the Northwest of England. He moved out of the city some years ago and now lives in Buckinghamshire, right at the end of the Metropolitan Line, but he says the better weather thing still applies. What’s more, he now sees red kites soaring over his house. 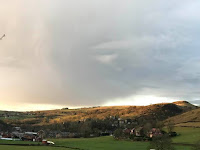 I still like the Northwest though. This morning I went out under blue skies buy as I ran I could see a huge cloud moving in. By the time I went past millpond it was raining on me.

But now the blue skies are back. Weird weather! I am waiting for a parcel and then we are going out seeking some vitamin D.

Assuming the Bidens ever get to move into the White House, the perhaps soon-to-be first lady has been getting advice already on how to behave, or atvleast how to style herself. Jill Biden has a PhD and so is Dr Biden but journalist Joseph Epstein wrote this:

“Madame First Lady — Mrs. Biden — Jill — kiddo. Any chance you might drop the ‘Dr.’ before your name? ‘Dr. Jill Biden’ sounds and feels fraudulent, not to say a touch comic.”

Doesn’t he know that not all “doctors” are medical doctors?

He went on to write:

“Forget the small thrill of being Dr Jill, and settle for the larger thrill of living for the next four years in the best public housing in the world as first lady Jill Biden.”

Hasn’t he heard of independent women, not dependent on just being the wife of an important man? Maybe he’s shocked that she intends to continue with her own career instead of just being FLOTUS. After all, most US presidents’ wives do just concentrate on being just that - presidents’ wives. A bit like being a footballer’s wife!