Out adventuring no matter what the weather brings. Minimalist and Covid-era Nativity.

Last Friday we abandoned the idea of a Diggle Chippy Hike because it was snowing. Really snowing! It came down quite heavily. All week I have been receiving messages from my brother-in-law with screen shots of weather forecasts for this week. After some prevarication on Wednesday and yesterday, finally this morning he judged the forecast favourable enough and said he was on his way over, arriving about 11.15. Which he duly did, closely followed by our daughter and her two small people. 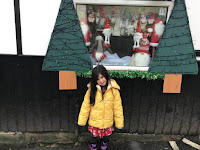 The sun was even shining, albeit a bit feebly, when we set off up the hill to Dobcross and down the other side, circumnavigating some roadworks with friendly workmen en route. The chippy, really just a wooden hut, was decked out for Christmas. Definitely a photo opportunity! 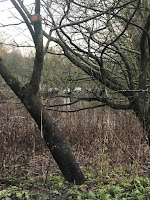 As we ate our fish and chips by the duckpond, feeding scraps to robins and magpies, my brother-in-law made a throw-away comment: “At least it’s not raining!”

My daughter and I shushed him, afraid he might have put a hex on our outing.

But we were too late! After a brief interlude in the nearby children’s playground, where I had to join in a game of “this is my house, would you like to visit it?” with the larger of the two small people, the “house” being a climbing frame, we set off up the back road to Dobcross and home. 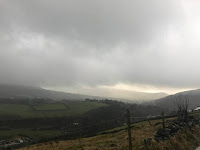 Half way up the lane we noticed it was getting drizzly. Looking over towards Pots ‘n’ Pans monument on the top of the hill opposite, we could see that the cloud had come down and that fairly serious rain was heading our way. 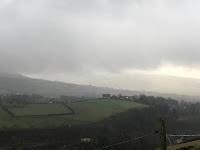 So the next mile or so were rather wet and soggy. But were we downhearted? Not at all! The views are still good even in the rain. And by the time we were heading down the hill from Dobcross it was easing off. Just in time for coffee and cake sitting on the front garden wall. Not a bad adventure at all. 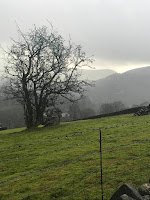 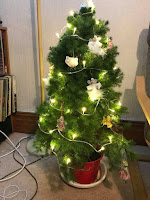 I sent our daughter off with a box of Christmas baubles and lights and so on for her to deliver, strictly on loan, to her oldest daughter who has a tree but nothing to decorate it with. After she acquired the tree she realised that her own box of lights and tinsel and baubles was still at the house she used to share with her boyfriend. As my tree, the one that is not really a tree at all, is ridiculously tiny, I have far too much stuff to hang on it. So it is tastefully decorated in minimalist style with lights and a few angels.

I read that minimalist nativity scenes are in vogue at the moment. People are crafting cribs out of lumps of clay and play-dough. Or wooden building blocks. A trio of vari-coloured blocks of assorted sizes represent Mary, Joseph and the baby Jesus, another trio are the kings and various lumps stand in for angels, shepherds, and a range of animals. Okay!

And then there are the nativity plays. In my experience of attending such events over recent years it has always been the reception class, the youngest in the school, who perform the nativity play. A tiny girl draped in blue and clutching a doll plays Mary, the most confident children get speaking parts as the kings or the shepherd, and various others wear animal masks to represent sheep and oxen and such like. And the whole class learns the carols to sing. And all the parents wax sentimental.

It’s not happening this year. But one school in Cumbria has managed to involve the whole school and half the local community in a filmed version of the Christmas story.

It’s all adapted to the Covid era and modern methods of communication. The shepherds are furloughed and Mary has a zoom call from the Angel Gabriel. Mary and Joseph can’t find a room to stay in because of Covid restrictions. Small angels run down hills in the Lake District. It sounds like a brilliant project and I’m sure the children involved have learnt a lot about all sorts of things as they made the film. Hurrah for a bit of initiative!