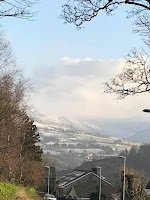 Well, yesterday turned into a very nice day, cold and crisp. We took a walk up the hill and admired the scenery. 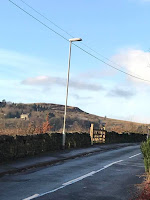 While we were out and about we popped into a place selling Christmas trees. The house is called the Old Toll House, so presumably in the past there has been some kind of official there collecting taxes of some kind. All I can find on the internet are reviews of their small restaurant/cafe/wine bar, which opened only a few years ago and seemed to be doing very well but, of course, has had to be closed recently because of the pandemic. I would have liked some historical information. I shall have to ask them sometime in the future.

In fact I could have asked yesterday when I stopped to look at trees but they were quite busy with people buying trees and I am wary of hanging around a lot of people for too long. Fortunately for them, as well as the cafe, they also run a small garden centre, which predates the food outlet, and for years have been selling plants, and bags of logs throughout the winter, and Christmas trees. I suspect the restaurant side grew out of the garden centre. 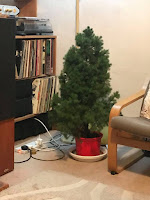 Anyway, I now have a tree ... of sorts. It’s not really a Christmas tree, but rather some kind of pot-grown shrub that people like to stand outside their front door and put Christmas lights on. Or so the Toll House lady informed me. She did tell me the name of the shrub but that went in one ear and out the other. Unnecessary information really! In our case it’s going to be indoors, pretending it’s a Christmas tree. Since we rearranged the furniture we only have a very small space to put any kind of Christmas bush, so this will do fine. After Christmas it can stand outdoors. I am assured it is slow-growing, so maybe it can serve again next year. We shall see. 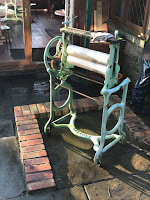 The Toll House is bedecked with ancient artefacts such as this mangle, which sent me down memory lane, back to the days of my early childhood when my mother used to wash the sheets in a gas fired boiler - the height of washing-convenience back in those pre-washing-machine days - and squeezed them through the mangle before hanging them out to dry. Those were the days! Especially for housewives!

I sent a photo of the mangle to my oldest granddaughter, who appreciates a bit of nostalgia. I am rather surprised she did not ask if we could buy it for her, as happened with an ancient sewing machine last year. Granted, she does want to use the sewing machine as it’s still in working order. I doubt she would use the mangle though!

But there it is, we have a tree ... sort of. Last year the two smallest granddaughters helped me decorate the tree. This year that’s not going to happen. 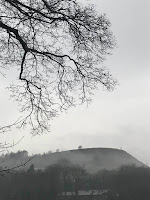 Today is dull and damp once more. The clouds have come down. Yesterday’s crisp cold and blue sky and sunshine conditions were sent just to tease us!

I have it on good authority that today is the feast of Saint Nicholas. Legend has it that he was from a rich family, in the third century AD, and used his inheritance to help the poor and needy. Part of the story tells that he once threw bags of gold through a poor man’s window. The coins landed in the stockings that were hung up to dry by the fire. And so a tradition was created! The modern Santa Claus is really a version of Saint Nicholas, corrupted from German or Dutch.

And he died on the 6th of December, hence the feast day. In some countries this is when children receive their Christmas presents - at least traditionally. I have a sneaky suspicion that in modern times with all the advertising and commercialisation some children get two lots of presents.

There’s another side to the story. Isn’t there always a downside? The 6th of December is also Krampusnacht, when the monster Krampus appears. Saint Nicholas might well give good children nice presents but Krampus delivers lumps of coal to the naughty ones. Watch out!