Reflections on running ... on Brexit negotiations ... on Christmas celebrations and school closures ... or not!

Running in the rain this morning - just for a change - I thought about some columnist or other whose stuff I read recently. He wrote about how he hates running but does it anyway because it’s the cheapest way he has found of keeping his middle-aged spread at bay. You don’t need to pay a subscription, you don’t need to belong to a club, and unless you are really fanatical you don’t need the latest fancy gear to run in. And so he runs unwillingly, listening to a podcast because listening to music puts him off his running rhythm.

But me, I don’t mind running, even in the rain. If I didn’t enjoy it, I wouldn’t do it. The hardest thing is getting out bed and getting organised when you can hear the rain outside. But once you are out there in the rain, it’s all good. Well, okay, you get wet but that’s why you wear a waterproof, and as long as you keep moving you don’t get cold. Whatever the weather, it’s good to be out there. All right, I am reluctant to run when it’s icy, however, but that’s a different matter.

I don’t listen to music or podcasts either. It’s a sort of a zen thing. You run and let your thoughts wander where they will. And if you don’t have any profound thoughts, what does it matter? Who is going to judge you? Indeed, who is going to know? I don’t listen to stuff when I am out walking either. There’s enough to see and hear to keep a walker occupied. Besides, it can be dangerous to be lost in your podcast world. When I am out on my bike I am often amazed at the people who do not hear my bicycle bell - which is quite loud enough, far superior to the faint “ping” some bike bells emit, I am proud to say - because their iPods or phones are playing too loudly in their ears! And then, my iPod has got itself lost somewhere. I have hunted all over the place, to no avail. At some time in the future I will probably resurrect a bag I have not used in a while and discover my iPod in a hidden pocket. Here’s hoping!

As regards running gear, you do need to replace your running shoes once in a while, unfortunately. I have amassed a collection of almost worn out running shoes. I need to do a Marie Kondo sort-out on them. But there is a bit of me that says to keep them “just in case”. When the mud-puddles by the millpond have soaked the current pair I may need to use an old pair. How many just-in-case pairs does a person need though?

Of course, one of the delights of being a bit of a hoarder is that from time to time, doing some tidying up, you come across an item of clothing you have not worn for ages, maybe for years, and it can be brought back into use. Refreshing your wardrobe at no cost! It doesn’t really apply to running shoes though! 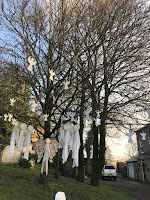 Yesterday I wrote about unusual Nativity scenes and later remembered these photos I took on one of our out-and-about sessions. At the time I thought it was just a bit of odd tree decoration for Christmas but as the tree concerned was in the vicarage garden I have since thought that maybe it was actually meant to represent the Nativity scene. There’s certainly an important-looking angel in the mix. In the whole, however, it still looks like a blend of Hallowe’en and the Nativity. 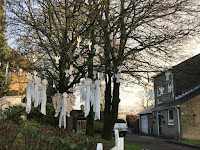 On wider-world matters, my brother-in-law keeps sending me messages about the parlous state of the Brexit negotiations, such as this from “The Ragged Trousered Philanderer”:-

"It is becoming increasingly clear that this reckless government only has one plan, to crash out of the EU without a deal” after the Telegraph reported that the PM’s chief of staff called negotiations a “sham” and that the strategy was to “run down the clock”.

My brother-in-law reminds me that certain people stand to make money out of betting on a no-deal Brexit, regardless of the consequences for the country as a whole.

And then there is the question of who to blame for the whole mess. This is not from my brother-in-law but from a friend

“I am sure there is a name for this type of creeping normalisation of an extreme idea .....?🤔

2019 - Nobody ever claimed it would make us better off

If other comments and predictions are correct, maybe Mr Johnson will resign in the spring and go off to make more money writing his memoirs. Who will replace him? Yet another scary question!

Meanwhile, Christmas approaches, we are sort of encouraged to get the family together to celebrate. And so some schools have decided to put their teaching online for the remaining week of term, to avoid any of their pupils having to self-isolate on Christmas day. A laudable idea, you might think. And yet ... now reports are appearing of headteachers being threatened with legal action for doing so. The government plans to use its emergency powers under the Coronavirus Act to keep schools open. So apparently it’s better for all those secondary school age youngsters, reportedly the biggest spreader group, to keep on mixing from subject-set to different subject-set and to continue to travel on the bus to school. Has Gavin Williamson ever travelled on an early morning bus full of school schoolchildren? I have! It’s not good! I confess to not having done so since the pandemic started but I would bet my bottom dollar that social distancing among 13- and 14-year-olds on the bus is not very good! Hey! Ho! Official letters have been received by some head teachers!

My brother-in-law has just sent yet another message, this time about Rachel Johnson criticising her PM brother’s behaviour. Time to finish this post.

Life goes on! stay safe and well, everyone!