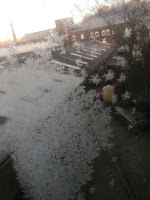 So that’s another Christmas Day just about over and done with. It began with frost patterns on the windows - that’s how very cold it was! I didn’t get up and run. We had had a request from our daughter for an early lunch. If I had run, either around the village or up and down the Donkey Line, by the time I’d come back, showered and breakfasted it would have been time for lunch. 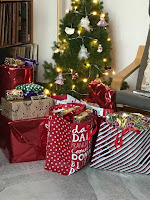 As it was, time for lunch came, the food was almost ready and our daughter had not arrived. I should have known. This was a regular occurrence back in the time when we could do regular Sunday meals at our house. So everything was put on hold for a little while. They turned up not too much later. All was fine. The stack of presents under the tree waited until after lunch.

We had set up small tables at the far end of the kitchen / dining room to socially distance everyone. That seemed to work, although  the two older granddaughters insisted that they should sit at the “grown-ups’ table.

Lunch eaten, stories told and gifts exchanged, our daughter and family took themselves off for a rapid drive to the other grandparents’ house. After today we can’t visit, we’ll be back in tier 3, unless someone moves us to tier 4. After their departure we went for a walk round the village before tackling the washing up. The down side of feeding the masses 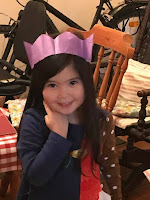 But we had a good day, with a mad video chat to the Southern branch of the family, stuck in tier 4 until goodness knows when. Everyone seemed pleased with their various gifts.

Among other things, I received a CD of Joni Mitchell at Carnegie Hall back in 1972. And back in 1972 she had already produced a phenomenal amount of amazing material. Such a talent!

We even had a flurry of snow at one point over lunch. Not serious stuff. And tomorrow Storm Bella is scheduled to arrive! Interesting times!

Life goes on. Stay safe and well, everyone ?