Some Covid consequences - and a bit of Brexit effect too. Christmas progress.

The odd times we live in!

For the last week our daughter has been keeping away from us. Not that she doesn’t like us but a child in the class she teaches was sent home with a persistent cough and the request for the family to have her tested for Covid19. The instruction for the school was to carry on as usual until they had a test result. Is that really so? The rest of the class and her class teacher should continue possibly spreading the virus until they found out the result? Which has taken a week! My daughter just sent a message to say the child is back in school, having tested negative.  There has to be a faster way to test. If this is happening in primary schools, and presumably secondary schools, all over the country, no wonder there is disruption to education. Not to mention disruption to life in general. I suppose, indeed I hope, that we’ll get better at dealing with this once we have managed to vaccinate a majority of people, because it looks as though this is not going to go away on its own.

Earlier in the year much was made about the fact that pollution levels were greatly reduced because everyone was staying at home. As lockdown spread around the world  some scientist or other observed a sort of wave of cleaner air spreading around the globe. Well, that optimism didn’t last long. I am pretty sure ai read something the other day to the effect that all that reduction in pollution has not made a great deal of difference to global warming. That’s a shame but I guess we needed to stay unpolluted for a good while longer for it to really have an effect. And now, by one of those weird twists pollution levels in cities are reported to be going up again. As restrictions have eased - well, to some extent and then maybe been reinstated - people have gone back to work but they have been reluctant to use public transport. I can understand that. I am not even considering getting on a bus or tram or train in the immediate future. So those who have to go to out and about have been using their cars again. Your own car feels like a sort of extension of your home, a safe mobile bubble where you do not need to exchange air with strangers ... strangers who have goodness knows what microbes to breathe on you!

And now there is this, from a report in the Guardian:-

“British holidaymakers will be barred from the European Union from 1 January under current Covid-19 safety restrictions, with the EU commission indicating there will be no exemption for the UK.

Only a handful of countries with low coronavirus rates are exempt from rules that prohibit nonessential visitors from outside the EU and European Economic Area (EEA) – with the UK included only until the end of the Brexit transition period.”

Another reason to regret voting for Brexit for all those who did so - not me, I hasten to add!

But there it is! And just when my friends from my Italian class and I were looking forward to possibility of finally managing our postponed trip to Sicily. We were meant to go in May but, of course, that did not happen but we all left our deposits with the organiser. We’ll get there sometime next year. And I presume we’ll take another look at the Roman villa in Piazza Armerina. 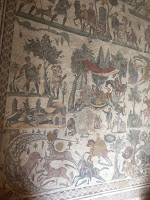 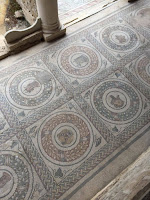 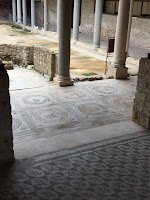 In the meantime we might have to make do with a post-Roman but Roman-inspired villa discovered in the Cotswolds.

Not quite Sicily but still quite impressive by all accounts.

Meanwhile, here in Delph, the day dawned nicely. Whether it will continue so remains to be seen.

But Christmas is coming. A trickle of cards is arriving every day. 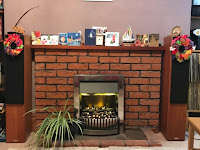 I sent my older granddaughters this photo of the living room mantelpiece and they declared Christmas officially begun. Why? Because Grandma has put up her home-made Christmas wreaths. It’s a sign!

Life goes on! Stay safe and well, everyone!