Another weekend! They seem to come round rather too quickly these days. Not that it really makes a good deal of difference to our lives. I suppose that for retired people every day is a bit like a weekend.

Yesterday, when the snow was pouring down, I looked out of the window at one point and noticed that three of the houses a little further up the road, on the opposite side to ours had huge, looping garlands of Christmas lights going from window to window. This must have been a concerted effort as all three houses had the same decoration. When did they put them up? Surely they didn’t go out in yesterday’s snow or Thursday’s rain to set up garlands of Christmas lights. And yet I am pretty sure they were not there earlier in the week. Another of life’s little mysteries! 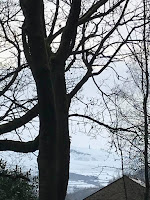 The snow, by the way, has disappeared from low-lying areas around here but is still making the distant hills look very seasonally pretty. 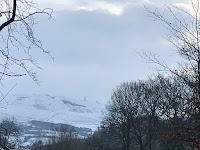 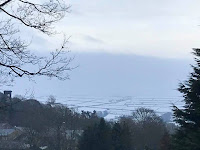 We don’t yet have any decorations, apart from two early Christmas cards. I need to go and buy us a Christmas tree, before they all disappear. It still seems a little early to me but everyone seems to be starting the festivities early. Anyone would think they need cheering up! So trees might be getting sold out. Surely there will be a little one left for me.

We don’t do external Christmas decorations anyway. I always wonder about the electricity bills that people must have if they deck their houses with masses of lights and flashing reindeer and Santas. Is that what some of the retired folk around here spend their winter fuel allowance on? And what about the environment? Aren’t we supposed to be reducing energy usage?

However, I suppose I had better look for a tree. I read about a family in Adelaide, Australia, who returned from a shopping trip to find the Christmas baubles from their tree all over the floor. The teenage daughter had checked that the dog was in the garden before they set off, so he was not to blame. They had no cat. Then they discovered a koala bear in the tree. They reckon he must have come indoors earlier when the doors and windows were open. Such are the difficulties of living in the antipodes!

In typical modern fashion the teenage daughter took the opportunity to post a TikTok of the koala, which has gained more than 16,000 likes. Modern Christmas times.

We have had our own animal related Christmas tree events in the past. At one time our daughter had a crazy, curtain-climbing kitten. He literally used to climb up the net curtains and then needed rescuing. And at Christmas he climbed up the middle of the tree ... and needed rescuing, lf course.

Then there was the rabbit, a rabbit which used to be allowed to roam around the basement kitchen, much against my better judgement. I had no wish to find collections of rabbit droppings around the place but I was overruled. That year, for some reason, we had two trees. Maybe we had decided that the previous year’s rooted tree, which had miraculously survived outdoors to see another Christmas, was too large and unwieldy to carry upstairs to the living room, but still small enough to come indoors into the basement kitchen. Our eldest granddaughter, at that time our only granddaughter, was living with us and so we felt justified in having a tree in the kitchen and another in the living room. Her presence also explains the rabbit roaming free.

Anyway, there was the tree, in the kitchen, nicely decorated with coloured lights. One morning I went to switch the lights on and nothing happened. I carefully checked all the bulbs were properly screwed into place as one loose bulb can cause a problem. And then ai discovered that the plug I had inserted into the socket had no more that a couple of feet of wire and was no longer connected to the lights on the tree. The dratted rabbit had done what rodents do: he had bitten through the wire. On balance, it was fortunate that he did so while the lights were not plugged in. Otherwise he might have been electrocuted. That would have been a cause of too much consternation and distress for the granddaughter, not to mention her animal-sentimental mother!

“What really says Christmas to you? Is it a squeezy bottle of Sainsbury’s “Pigs in Blankets Mayo”? No? You surprise me. Or not, as the case may be. For the December issue of Observer Food Magazine I tasted that particular joy, and so many other Christmas products, alongside the fabulous chef Ravider Bhogal. Oh, the things they make us do for you. It is, for the record, mayonnaise punched up with artificial smoke flavouring and, intriguingly for a product with the word “pig” in the title, suitable for vegetarians.

It’s not just terrible. It’s also symbolic of a trend that has come to blight the British Christmas: a repeated failure of NPD. Those letters should stand for New Product Development. All too often at this time of year, however, they seem to stand for Neurotic Product Desperation or, most simply put No, Please Don’t.

I mean really, has anyone ever really felt more Christmassy because Walkers have released their special edition brussels sprouts flavour crisps? That’s crisps, which taste of cabbage. By design. It’s not just a dreadful idea. It’s bad manners. How about winter berry and prosecco crisps from M&S? Or prosecco and elderberry crisps from Tesco? Or, in an attempt by Kettle Chips to be both weirdly patriotic and awkwardly Christmassy, truffled cheese crisps with “a splash of English Sparkling wine”? The word “splash” there makes me think of reaching into a bowl of snacks at a dreary Christmas party, to discover someone has accidentally emptied half a plastic cup of fizz all over them.”

I sympathise! Too much mixing of flavours and genres! Crisps should taste of potatoes, or at the most salt and vinegar or cheese and onion - definitely not eggs and chips (which flavour you can buy in Mercadona supermarkets) or anything Christmas related.

That’s enough of that!