It was a cold ride to Uppermill market this morning. Well, really it was not a bad outward ride to the market but by the time I was riding home the rain had started and the wind was against me, so that was a cold, hard ride. What’s more I was already half frozen.

Almost certainly because it is so close to Christmas, and because most shops will close early tomorrow, Christmas Eve, there were queues everywhere today, longer queues than usual. First I queued outside the co-op, where they were very slowly processing people through only one check-out thus slowing down entry to the store. Then I headed up the side street to Alimentari Alberti, the Italian greengrocer’s, where I usually park my bike outside the shop. This morning, however, there was a long queue outside the greengrocer’s and outside the butcher’s next-door. No room to park my bike so I went and locked it to a tree, one of those trees in a metal cage, in the square where the market is set up. Leaving the bike securely locked, I went back to the greengrocer’s and set the world to rights with a lady behind me in the queue. Next was the bakery, where the queue had fortunately reduced a little but was still quite long enough for me. No queues at cheese and biscuit stall - where I collected the vacuum-packed chestnuts I ordered last week - or at the fruit and veg stall and only two people ahead of me at the deli. Unfortunately the single customer in the deli seemed to take ages and ages sorting out her purchases.

By then I was beginning to feel rather like an iceberg. Although dressed in winter running trousers, a warm sweater and my waterproof jacket, I was not dressed for standing in a queue outdoors for ten to fifteen minutes at a time. So I had to entertain the others in the queue by hopping up and down, walking in small circles and banging my hands together to prevent the onset of frost bite. These antics also served to convince my Fitbit that I had walked some distance - as a rule my cycle-ride to the market and back only amounts to the  equivalent of a couple of thousand steps.

As I stood in my various queues, I thought of the lorry drivers lined up at Dover. At least my queueing was quite short-term and I would return home with my panniers full of  goodies. Later the radio informed me that some drivers had been told that ports were open again and headed that way, not understanding that they needed to go for a Covid test first. Another bit of chaos! Lorry drivers are understandably angry: no or few toilet facilities, sleeping in their cabs, running out of food, many faced with the prospect of not getting home for Christmas. I’m surprised there have not been more noisy protests!

More Christmas cards arrived this morning, including one written by our six-almost-seven-year-old granddaughter. For years we have received Christmas greetings from one of our oldest (in the sense of longest-standing) friends in the form of a family photograph, just a group photo with greetings on the back. As it somehow seemed rude to throw these away, now we have a sort of record of how the family has grown and changed over the years. One of today’s cards was another family photograph, this time printed onto a proper Christmas card, from another old friend. Ironically this came from a former girlfriend of the original photo sender, from our late teenage years. I would say she had outdone her old boyfriend in card production though. I have never been sufficiently organised to do such things but then we have never really been into documenting events in that way - no formal photos of our babies, especially not those with a new baby cutely posed in a basket! It’s not that I don’t take photos. It’s just that I prefer spontaneity. But I suppose I could arrange for the best of my family photos to be made into cards. Possibly! 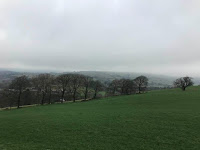 Talking of photos, here are a couple from our walk up Lark Hill, aka The Quarry Road, yesterday. The blue sky and sunshine of the early morning had faded into cloud cover. It seemed that we might have discovered where geese fly to when they go noisily over our house in the morning: it looks as though it’s a field half way up Lark Hill! 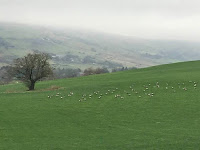 The paths up at the top of the hill have been severely churned up and present a serious muddy challenge to walkers. The copious amounts of rain which have fallen recently have not helped. We thought the mess might be the consequence of trail-bikers on their little motorbikes but the local farmers also appear to have been driving their tractors around their, judging by the huge ruts. It was not entirely clear what activity they might have been up to though. Not to me anyway, but then, I am not a farmer! So it goes.