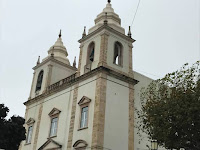 Yesterday was our day two in Figueira da Foz. Day one of the chess tournament. I have not brought my running gear with me in the morning in organised myself to go for a brisk walk, heading for a cash machine that I have used before, one that doesn’t charge me inordinate amounts of money to withdraw my money here. It was a good job I had my extra hour of sleep thanks to the clocks going back an hour because on Saturday evening, no, Saturday night, a bunch of revellers decided to continue talking at top volume below our window until silly hours in the morning.

It was odd walking back from the cash machine to hear someone call my name. It was Patricia, one of the organisers of the chess tournament, principal helpmeet of the main organiser. It was only 9 in the morning but she was already on her way to make sure everything was set up for the afternoon’s events. No wonder she was saying she was tired when we all turned up in the late afternoon for the opening jamboree.

Usually in years past there has been a big ceremony, usually with drinks and nibbles, sometimes with music. This year it was much more subdued affair, but still thanking the sponsor, who owns the hotel where the tournament is held, and various municipal officers who have helped to make everything possible. And of course, all sorts of covid restrictions have had to be imposed. All the players must wear masks. Anyone who leaves the room, for example to pop out for a cigarette (but who would do that in the rain that was falling yesterday evening remains a mystery) must tell the officials they are doing so and must sanitise their hands on returning. Such is the new normal.

Earlier in the day we had ventured out, before the rain started, to look for a restaurant, O Picadeiro, which is always elusive. I swear they move it, rather like the way things are moved around in the supermarket. It’s on the corner of a street, set back a couple of streets from the seafront. As the streets in that part of town are very geometrically organised, it’s hard to remember exactly where it is. And then suddenly you come upon it, it’s outside area a sort of glass box. 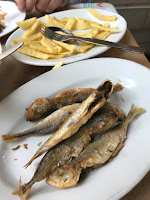 After finding ourselves on Saturday somewhat over-faced with huge servings of a whole sea-bream apiece, we decided on Sunday to be more restrained. So we had a mixed salad and a serving of carapaus between the two of us. We opted for chips instead of rice. According to my dictionary carapaus are a kind of mackerel. These were an indiscriminate small fish. The bill identified them as something different, “jaquinzinhos”,  which my online dictionary translated as “small fry”. That was about right. They were very tasty and the chips were good. Fish and chips for lunch … but not as we know it. 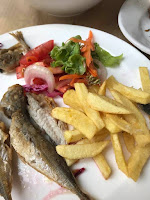 “On this day, 31 October 1926, 15-year-old Italian anarchist Anteo Zamboni attempted to assassinate the fascist dictator Benito Mussolini during a parade in Bologna celebrating the fascists' March on Rome. Immediately after his shot missed he was attacked and murdered by squadristi (fascist squads).”

The accompanying photo showed a boy who looked about 12. So young and so determined. A bit like Greta Thunberg nowadays, showing up for the COP summit, even if they won’t invite her to join in.