During the years before the whole Covid mess started, when we could still travel freely, before the Brexit mess restricted how much time we can spend in Europe, we came to and fro between Manchester and Vigo on a regular basis. And also in the few years immediately before the crisis, we watched with interest what was going on with the railway stations here in Vigo.

For a while the station at Urzáiz was closed and a new one opened at the end of Arenal, the Guixar station. Then eventually the new Urzáiz station opened but the Guixar station remained operational. So if you wanted to travel between Vigo and Pontevedra, or indeed all stations along the way to La Coruña, you had to check which station the train was leaving from.

A young friend of mine, a former student, whose boyfriend is a Gallego, Vigo born and bred, whose parents have a house near the beach at Samil, came with his boyfriend on the train from Madrid to Vigo to visit his parents and go to the beach. This was during the period when Urzáiz station was closed, knocked down, under reconstruction. Their train therefore arrived at Guixar. The boyfriend was totally freaked out by this. He had absolutely no idea where they were! I suspect he was not the only one!

During that time, I saw someone arrive at what was left of the old station, expecting to catch a train from there, only to discover that there was no station. His train was due to leave in 15 minutes from a station a good fifteen minutes or more walk away. After Urzáiz reopened, on more than one occasion I saw quite a few very confused people at the wrong station for their train.

But people adapt. Trains to and from Urzáiz were faster than those from Guixar, and still are. There is a slight difference in price, as my friend Colin has written about. You pay more for a faster journey.

Last time we were here, before the pandemic caused international chaos, we also watched with interest the developments around the new Urzáiz station. It looked like a huge construction site and you had to walk what seemed like miles to get to the trains themselves. As you walked along Via del Norte, the road overlooking the building site, you would see groups of people, mostly old blokes, leaning on the wall, looking down at what was going on. It was impossible to work out quite what was going on but everyone had an opinion and it seemed there were plans afoot for a new shopping centre there. 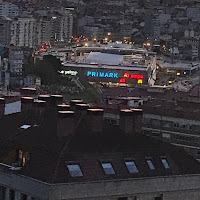 While we have been here this week we have had no occasion to visit this new development - Vialia is its name - but from our balcony we can see the huge blue letters spelling out PRIMARK. So Primark has arrived in Vigo, cheap clothing made in sweatshops in the Indian subcontinent for the most part by workers who are paid a pittance.

Anyway, yesterday we had lunch with our friend Colin from Pontevdra. We all had the chipirones encebollados that I had promised myself. Very good they were too.

After lunch he was catching the train back to Ponters. So we accompanied him to Urzáiz to take a look at the new development. It is large and bright and confusing, as is the Arndale Centre in Manchester. I’ve grown used to the fact that Piccadilly station in Manchester has a lot of shops, including a small Boots the Chemist and a small Sainsbury’s, as well as a selection of fast food outlets and coffee places. But it’s hardly a shopping mall. Similarly, Euston Station in London is something of a shopping mall, rather like an airport duty free section. Bigger than Manchester Piccadilly but then Euston is a rather more important station.

But this Vialia place is enormous. It seems as if the trains are a kind of afterthought. Heaven help you if you are in a hurry to catch your train!

I can’t say I was impressed. I accept that shopping is a leisure activity for a lot of people but I would prefer to keep my shopping and travelling separate. A little bit of airport shopping may be all right, as a way of killing time while waiting for your plane. But having to plough through a huge complex with cinemas and food halls to get to train platforms seems a little over the top to me.

Here are a couple of pictures, one of which shows what turns out to be a Christmas tree made of huge sparkly letters. I had to look hard to work out that letters spell out XMAS and LOVE, good Spanish words!! 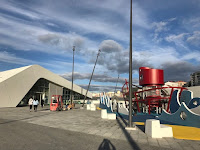 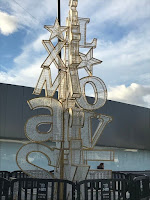