Avoiding the rain. Getting lost. Successful shopping and no mention of Black Friday.

In the night it rained - copiously! I fully expected it to be raining this morning but, no, it was fine; there was even some blue in the sky. So I got up and organised myself for a run, putting on my running raincoat just in case. I hesitated about following the route that takes me past the duckpond and into the wooded area. The path there gets very squelchy when it rains. Yesterday it was hardened by the frost but today there was no frost. Did I really want wet feet? In the end I decided to risk it. 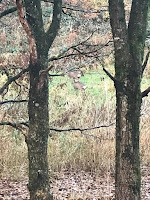 Half way down the woodland path I came across a group of people standing quietly, pointing out something on the hillside. They were talking very quietly. I realised that they had spotted deer. Loads of people have told me about deer in the valley but I’ve not seen them there before. Usually one of my nodding acquaintances says, “Look out for the deer in such and such a place”. But by the time I get there the deer have moved on. They don’t hang around for long. Today, however, I managed to see them! Splendid! 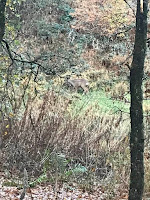 When I got home my daughter rang me. Yesterday afternoon we had discussed a possible shopping trip today. Now she wanted to know if I could meet her in Uppermill at around 11.00. She was taking her littlest one to Boomting, one of those activity sessions for toddlers where they “experience” music, banging drums and singing along, and incidentally learning to follow instructions while apparently playing. All good! She and the little fellow would meet me in a cafe after their musical adventures. We would be joined by her second eldest daughter who would get there by bus.

I arrived just after 11.00, thinking I might be late. No sign of anyone. My phone rang. It was granddaughter number two, who had just got off the bus and was managing to get lost looking for the cafe. Twice I redirected her, preventing her from heading up the hillside behind Uppermill, and eventually found her. One of the problems of being accustomed to go everywhere by car is that you never really take note of where places are and can get mildly lost in places which should be familiar to you!

After my daughter joined us, we had some refreshments and finally got on our way to IKEA, looking for this and that on our respective shopping lists. I now have supplies of biscuits, as well as a couple more Christmas presents sorted out. Oh, and I got us a new doormat for the front hall. Last time I went to IKEA I bought a new doormat for back door as the old one was becoming a health hazard, so frayed that it was tripping everyone up. We decided a while ago that the doormat in the front hall was seriously inadequate, altogether too thin and flimsy, less than useless in fact. So now we have a fine new, very scratchy doormat in the front hall! Result!

We collected the second smallest child from school on our way home. Everyone came in for coffee (not for the small people) and biscuits and a bit of a craft session, mostly drawing unicorns and rainbows. Even the small boy joined in, looking intently at what his five-year-old sister was colouring and declaring seriously, “Wow! Rainbow!” Another bit of vocabulary we were unaware he had!

In the midst of all my comings and goings today came the negative result of our CPR tests. We didn't think we had Covid but it's good to make it official.