A bit of a reconnaissance. Changes - not all for the better.

Coincidentally with our being in Vigo some friends of ours are on a cruise which calls in at the Ciudad Olívica on Sunday. So the plan is to meet them for lunch. Under normal circumstances we would have no doubts about good places to take them. However, these are not normal circumstances. We’ve all had a good year and a half (+ a bit more) of pandemic altering all our circumstances.

Time for a bit of a reconnaissance, we thought. Which also gave us an excuse to go out for lunch yesterday

A large section at this end of Rosalía de Castro street seems to being dug up. In various other parts of the town on the way to the port demolition and reconstruction is underway. At least one building had the stones of its facade numbered, indicating a plan to keep the old facade as it was before, which is always a good thing. We didn’t get as far as Príncipe, as we were angling down more to the alameda and the port, so goodness only knows what’s going on there.

The alameda, Avenida de Santiago de Compostela, is one of my favourite spots in Vigo. It’s a lovely broad avenue, semi-pedestrianised, with old established trees, many of them mature chestnuts. There are even notices now telling you these are live trees and that Vigo is looking after them carefully. With its fountains fountains its usually a nice place to stroll. Not at the moment though. It looked as though the circus had come to town. Well, at any rate, the funfair. At one end is what looks a bit like a ski slope but which I suspect is one of those structures where you climb up the steps, sit on a mat and slide down, risking life and limb. Only for the young and foolish, in my opinion. 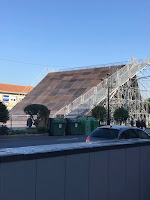 At the other end they’re putting up a ferris wheel, a huge affair. 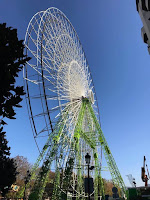 There’s at least one roundabout and others seem to be in the process of being installed. 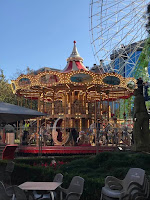 Next to the ferris wheel some wooden structures are being put together. I suspect a German style Christmas market. There are decorations all over town. Abel Cabellero has clearly gone to town to encourage Christmas visitors this year. In fact, our Portuguese driver, the one who drove us from Figueira to Porto on Monday, told me during the journey that he and his wife, and a couple of friends, are visiting Vigo this weekend, planning to see the illuminations (will they all be lit up already? Goodness me!) and to do a bit of shopping.

We strolled past one of our favourite restaurants, the Rosalía Castro, near the port, where the waiter recognised us - that says something about how many many times we have been there to eat chipirones encebollados - baby squid fried with onions - delicious! We checked that the place will be open on Sunday. He asked if we wanted to book a table. Unfortunately we don’t yet know what time our friends will arrive. So Armando ( we now know the waiter’s name) gave me a card with his phone number so that I can call to book a table. That’s service for you!

And off we went to another of our long-standing favourite places, La Porchaba, bar and restaurant, only to find that it’s changed hands - victim of the pandemic? - and is under new management. First, the service was brusque, not unfriendly but brusque. We asked for a list of tapas - much reduced - and while we perused it, ordered a glass of Albariño. Short measure compared to what we were used to, and for that matter compared to what we were getting in Figueira da Foz. And there were no free tapas - we had grown used to a nice selection of tapitas at the old Porchaba.

This led to the resurrection of Don Gruñón. Phil has not been Mr Grumpy for a long while but he had a little complain about the lack of free tapitas. Free tapas did arrive eventually. Things were not helped by there being no “setas con jamón”, an old favourite tapa of garlic mushrooms with jamón serrano. The waitness did suggest a portion of “huevos rotos con puré de patatas y jamón serrano” - ham and eggs with a bit of mash, and your fried eggs are a bit stirred up - but it was almost €20 for one serving.

We explained that we’ve been going there for hears and had enjoyed our “setas con jamón” and were a little disappointed. That’s when the waitress said they were under new management. We settled for a small tortilla. You can’t usually go wrong with a Spanish potato omelette for Phil. Except that it came without a knife to cut it up and share it between us. Don Gruñón emerged again! The omelette wasn’t bad though!

After that we went for coffee at the Rosalía de Castro cafe (lots of places are names after Galicia’s female writer heroine) where, fortunately things haven’t changed. The wifi password is still on the wall. They still give slices of cake with the coffee. All’s well with the world.

And the sun is still shining out of a blue sky.