Halfway point. Observing life while out and about.

So Wednesday has come and gone. That’s the midpoint of our stay in Fugueira. Ot is a well known fact that when you reach the midpoint of a stay anywhere time speeds up. In fact it works in everyday life as well. You go bak to work after the weekend, feeling seriously Mondayish and rather gloomy. But by the time Wednesday is over you start looking forward to the weekend again. We must be careful not to wish our lives away! 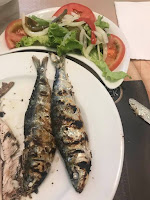 We finally made it into the Caçarola Dois for lunch: soup, sea bream fillets for Phil and sardines for me. And I managed to get us chips instead of the ubiquitous boiled potatoes. All good apart from my spilling half my glass of wine all over my plate, and onto the floor - sardines in white wine, anyone? I made up for it by having panna cotta com frutos vermelhos for dessert, a special treat!

As we ordered coffee we remembered that the café pingado (small black coffee with a dash of milk) in that establishment is black coffee that has been stood next to the milk jug for about five seconds! So we had to catch the waiter on the run - it was literally a case of “you want coffee, don’t you?” and he was off - to try to persuade him to put a little extra milk in. So one arrived as requested, well, more or less, and the other just a black coffee!! Still, mustn’t grumble: the food was good and the waiters work very hard. We’ll see what tomorrow brings.

Odds and ends I’ve spotted when out and about:

There was a man “mending” one of those ramshackle looking collections of wires at the joining point of two buildings that the Spanish and Portuguese do so well! . As he balanced on a stone balcony his ladder fell to the ground with a great crash. He barely glanced at it and carried on working, unconcerned. I was glad I was on the opposite pavement. No, I didn’t try to pick his ladder up.

There’s an apparently abandoned building site on the route we follow from the chess venue to our hotel. Certainly for the last few years no progress has been made that I can see. The other morning I noticed a chap opening up the barrier that surrounds it and closing it carefully after himself. He went and knocked/banged on the rudimentary metal shutters closing off the ground floor and received a growled response. I didn’t wait to see what was going on but it looked to me as though some homeless were squatting here. Maybe so! 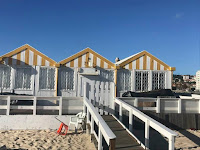 In a sheltered spot by one of the stripey beach huts, out of the wind, a woman was boosting her tan on Wednesday afternoon. She already looked well cooked. No, I didn’t take a photo of her.

Just off the boardwalk on the way to Buarcos a bunch of blokes were playing pétanque. A lot of shouting and measuring ! Yes, I did take a photo, discreetly, from a distance. 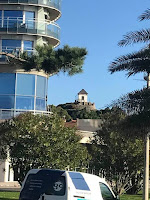 Behind the modern building, the high rise flats and the hotel that looks like a spaceship, you can see a bit of old Figueira.

It might have been a lighthouse but probably not as it’s not really the right shape.