On Friday Miguel, tournament organiser Miguel, talked to me about travel arrangements for going back to Porto. A driver would take a group of us. First he suggested 3.00 on Monday afternoon as a pick-up time. Then he changed it to 4.00. We began to wonder about our onward travel to Vigo from Porto by bus and told him we’d confirm on Saturday. We really wanted to get to Vigo before the supermarkets closed.

So on Saturday we went to the railway station to enquire about trains. We’ve done it before: slow train to Coimbra B, stopping at every single station along the way.  I even wrote a poem about it one year:

The sun dropping from the sky.

A compilation of stations:

Fontela with its old building

oddly reminiscent of a medical condition

Varrides with the tall feather plants

Alfarela of the many lines

and the freight trains rushing

(Who is that holy male?)

Amial, or is it Ameal?

Why can't they decide?

Names with a foreign accent to trip the tongue

not to trip off the tongue -

for so prosaic a concrete station.

And then a fast train to Porto. With my halting Portuguese I got the necessary information. We weren’t very happy with it. It would have meant getting up at the crack of dawn and getting a taxi to the station. In the end we decided to go with the lift and ask to be dropped at Porto airport, where we can catch a bus to Vigo.but we’ll arrive late there. So it goes. 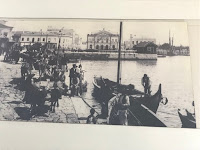 One bonus of walking to the far end of town was that we could investigate a restaurant we had discovered here probably three years ago. “O Cais do Heleno” - Heleno’s Wharf ( I looked up “cais” online) - is a small family run place serving some of the freshest fish imaginable. It’s decorated with photos of Figueira, including an old one of the dock area.  When we first discovered it, the young lady who served us explained that what they served very much depended on what had been available fresh that day. She was still there but I don’t think she remembered us. Why should she? 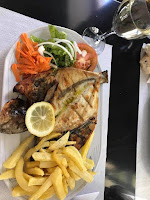 Phil had “robalo” - seabass - and I had “dourada” - sea bream - both served with salad and chips. And a nice glass of white wine in my case. Phil had water. He needed to keep a clear head for playing chess later.

They serve their wine draft - did I want it “com gas” - sparkling? No, not really. 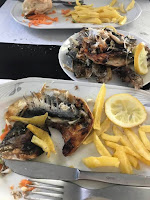 Then a small coffee and off we went, leaving the fishy detritus behind us.

All for €18.10. A bargain again! No wonder people choose to eat out. And the locals were eating there, always a good sign.

Across the road there was a flea market. I didn’t go bargain hunting. There is no space for extra bargains in my luggage. The first time we came here to Figueira I stumbled across a flea market in a small park. It was a bright sunny morning, like yesterday and the day before and today! And the collections of old brass ornaments and kitchenware, old glass bottles and bits of assorted machinery and tat positively sparkled in the sunlight under the trees.

It was reminiscent of the scene in the film “Empire of the Sun” where the released prisoners from the Japanese prisoner of ear camp, having marched for miles and miles, arrive at an old sports stadium. It is full of good confiscated by the Japanese from rich colonials’ houses. All the cars and showy furniture, pianos and motor cycles, fur coats and elegant shoes are spread out in the stadium, uselessly shining. The stuff in the Figueira park was by no means so luxurious but it did shimmer. That park is being renovated, which may explain why the flea market was squashed into the road island  between two carriageways. Good luck to them!

So tomorrow it’s goodbye to Figueira for another year. No prizes for my chess player but that’s how it sometimes goes.