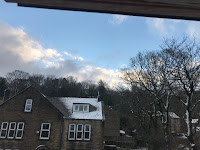 Storm Arwen raged all night. She was still blowing when I woke up this morning but at least she’d stopped raining and snowing on us. It all looked very picturesque from our attic window.

It crossed my mind that maybe we give the storms names to appease the Storm God, to make that deity think we have adopted its offspring. That’s rather like naming the Cape of Good Hope in a positive way to try to reduce the chances of ships foundering as they went round the cape.

I went and did a bit of research. It seems the Americans started naming storms and hurricanes in the 1950s. Before that they were tracked by year and the order in which they occurred. This caused confusion if two occurred in different places at the same time and in the end names were easier to remember. Of course, the first names were all male names but in 1978 equality arrived and female storms were allowed to exist.

It seems that in the UK we started naming storms in 2015 when an organisation called Name our Storms was launched, with a new list of names issued each September.

“The list runs from early September to late August the following year. This coincides with the start of autumn when the likelihood of low pressure systems and the potential for named storms increase.

The naming of storms using a single authoritative system should aid the communication of approaching severe weather through media partners and other government agencies. In this way the public will be better placed to keep themselves, their property and businesses safe.” 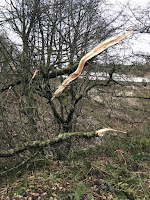 I decided to forego my run this morning, not fancying being blown over, but later in the morning I set off to walk to Tesco in Greenfield. There were sticks and small branches all over the surface of the Donkey Line. I was very glad not to be on my bike as it would have been a serious hazard. At one point there was half a tree beside the path - okay, I exaggerate - and further along my route a tree was blown down on Den Lane, above Uppermill. 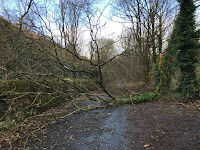 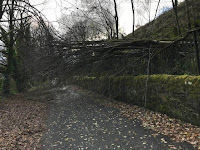 I did get some nice pictures of snowy hills though. 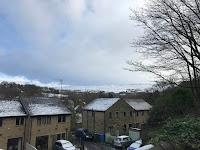 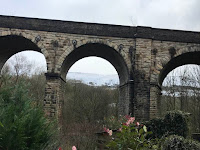 As I stepped out into the bright but blustery weather, all wrapped up in my fleecy-lined winter coat, I thought of the desperate people trying to cross the channel in unsuitable boats. I had read this article about those lost in the Channel, most of whom have not been identified.

In our safe lives it’s hard to imagine using your savings to send your son away on a dangerous journey, in order to avoid his having to join the army of a regime he disagrees with. It’s hard to imagine being in touch with your son by phone and being able to pinpoint by satellite exactly where he was in the Channel, up to the point when the boat went down and his phone went with it. There are mothers hoping that their sons have made it into a detention centre, even a prison and that that is why they are not in touch. That’s easier to accept than believing they were lost in the Channel. It’s hard to imagine the sadness of simply not knowing.