Yesterday was a strange day.

For one thing, instead of ordinary, standard meals, we had breakfast three times: once in the normal way in the flat in Vigo, coffee and nice fresh bread from my good bakery; secondly a coffee and croissant in the airport at Porto, the timing of luggage drop-off, going through security and eventually boarding the plane rather inconveniently getting in the way of sitting down to a proper lunch; and finally tea with toast and marmalade in the mid- to late-evening when we finally got home, it being a little late to start buying ingredients and then cooking proper food.

I don’t suppose it did us any harm!

Then there was the discovery that the two rival bus companies ALSA and AUTNA, who both run services between Vigo and Porto, can actually cooperate - with each other if not with passengers! We had booked tickets on the AUTNA website for a bus at midday. Arriving at the bus station, we spotted a big yellow bus in the usual bus bay. (Confusingly both companies use big yellow buses!) It was an ALSA bus. We were supposedly travelling with AUTNA. Perhaps this one left earlier? Or later? No, at 12.00. We sought information, in case our bus was leaving from a different bay. The information screens were dead. The information booth upstairs in the bus station said bay 3! Where the ALSA was waiting! Eventually I was able to speak to the bus driver. This was the correct bus. Despite this being an ALSA bus, our AUTNA tickets were valid. The bus companies had come to an agreement. Someone should have told the passengers who bought their tickets online through AUTNA, a much easier website to deal with than the ALSA one.

It’s a good job I was able to speak to the driver. Based on our previous experience of these two companies, we might have stood waiting for an AUTNA bus to arrive as the ALSA bus departed, leaving us stranded!

And finally there’s the nastiness of wearing a mask just about all day. We donned our masks to travel to the bus station by taxi. In the bus station and on the bus, we wore masks. For a few minutes, as we collected our suitcases from the bus outside the airport we breathed freely. Inside the airport, apart from when consuming coffee and croissants, we wore masks. And Ryanair reminded us again and again during the flight that we had to wear our masks all the time, unless eating or drinking. It probably drove some people to drink. That might explain the young woman behind us who sang, yes, sang, intermittently throughout the two and a half hour flight!

So, indeed, a rather unusual day! Not one to repeat in a hurry! 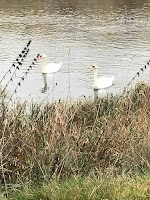 Today dawned cloudy but moderately bright. I resumed my usual running route. The swans were still there on the millpond, or they were there again. I haven’t managed to see anyone to ask about that.

And now I suppose I need to start thinking about Christmas. They’re selling Christmas trees in the local Tesco!