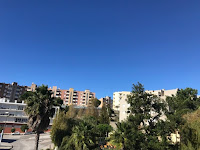 Friday was another day of blue sky and sunshine.

We met a friend for lunch at the Nucleo Sportinguista. It’s become a tradition that we do this towards the end of the Figueira tournament. 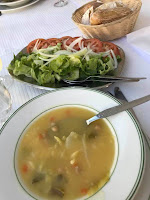 They have quite strict rules there: every diner has to have a main course, there is no sharing one dish between two. I suppose you could all have something different and share them but everyone has to have a main course. And then the potatoes are always boiled; they don’t serve chips, not even as a side dish extra. The potatoes are good quality. Maybe, like the Galician potatoes, Portuguese batatas are the best in the world. The soup was on the house though and they were happy for us to share a mixed salad between the three of us.

And the fish was excellent as usual. 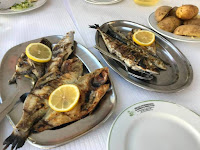 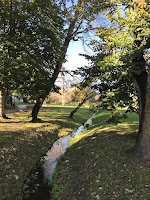 Afterwards we went for a stroll through the park in the sunshine. Always good. 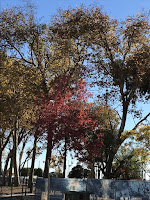 I’ve been catching up on odd bits of news. Apparently the Toyota is the most common car in Afghanistan. Maybe the white Toyota is the most common of all. So it turns out on investigation that the drone that blew up a white Toyota in Kabul on August 29th killing 10 civilians, including children.had been following a white Toyota and assumed that this was the same one. An “honest mistake” said the Pentagon investigators. “But it’s not criminal conduct, random conduct, negligence.” So that makes it all right then, does it? It seems to me that if we are going to kill at long distance like that we need to be absolutely certain of our targets. But it was ‘just a mistake”!

Then there’s the odd skincare advice I come across online. The latest suggests that mixing coffee grounds and honey (the latter for its anti-bacterial properties) makes a good exfoliating face wash. Hmm! I would imagine it’s very gritty. I’m very wary of exfoliating face washes at the best of times, let alone home-made ones. The idea of removing a layer of skin from my face has never appealed to me. It’s something to do with my burning easily on sunny days. All those childhood years of recognising that summer had arrived because my nose started tompeel.  If you must use coffee grounds as part of your cleansing routine, I would recommend using it to attack hard skin on your heels!

My grandmother used to use tea leaves as a mind of fertiliser on her plants. I doubt that tea bags work as effectively. Can coffee grounds be used for such a purpose? I wonder.

For a good long while now articles have abounded about women’s biological clocks running out, all about the hard decision to have or not to have a baby before it’s too late. There’s always the problem of finding the right father for the child and then there’s the question of your career plans. But it’s always been assumed that men didn’t have a biological clock. Now it turns out that they do and men are beginning to go through the  same kind of angst. One such anxious young man, watching time slip away had this to say: “It started with me thinking about how I’m looking to buy a house, and everything is happening too late in my life. Then I started worrying about how long it would take me to save again to get married, after I buy the house. I was doing the maths on that – when will I be able to afford to be married, own a house and start having kids? Probably in my 40s. Then I started freaking out about what the quality of my sperm will be like by then. What if something’s wrong with the child? And then I thought, oh no, what if me and my girlfriend don’t work out? I’ll be in an even worse scenario in a few years.”

And I sympathise with some of his worries. The business of saving for a deposit on a house and then being able to pay the mortgage I can fully understand. But really, if he’s deadly serious about wanting the best for his hypothetical child, why does he need to stress about an expensive wedding? Why don’t he and his girlfriend just slip off and get married - it can still be a nice romantic moment - and maybe have a party for friends and family without making it a big official reception. Because once you start to call it a wedding reception all the costs seem to sky rocket. And he could use the money to buy all the paraphernalia needed for a modern baby.

But maybe I’m too much of a realist. Who knows?