Fireworks. A bit of bonfire night nostalgia. Back in Figueira.

My oldest granddaughter has been protesting that her dog and her cat for that matter have been terrorised by people setting off fireworks near her house. I commiserated, reminiscing to when fireworks were just for mischief night and bonfire night, provoking questions from her and her 18 year old sister about mischief night? They asked what mischief night was. The oldest asked if it was Hallowe’en.

So I explained that I had forgotten they were so young! It used to be a tradition on November 4th for rascally bad boys to go round putting bangers through people’s letter boxes (can you imagine?), ringing on doorbells and running away, letting off noisy fireworks in unusual places and generally creating mayhem. None of them would be old enough to drink so it wasn’t a drinking spree. Most of them were just kids, the same ones who for weeks before bonfire night had dragged a guy round on a bogey (go-cart) asking everyone for a “penny for the guy”. That’s how they had money to buy noisy fireworks for mischief night.

Hallowe’en didn’t come into it. Nobody did trick or treat back then. Hallowe’en was mostly ignored. However, Phil reminded me that bangers and ripraps were available to buy for a few weeks before bonfire night. Ripraps were nasty pieces of work, several bangers fixed together to explode each bit in turn and so leap about causing mayhem. It was all part and parcel of the time, like having rolls of “caps” for your “cap gun”. Of course, that was largely considered to be boys’ stuff!

But more elaborate fireworks were not available for children to buy. Besides, mostly we didn’t have the money. We had to rely on our parents buying a suitable box of assorted fireworks. But I remember bonfires in our garden, with various friends and relatives coming together to pool the fireworks. And my father would bake potatoes wrapped in tinfoil in the fire as it got hot enough. Ah! nostalgia!

Anyway, here we are, back in Figueira da Foz. It’s not much changed. 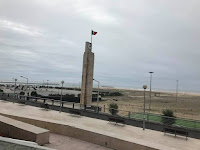 The chestnut sellers are out on the streets. 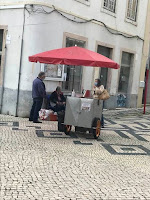 There’s still the contrast between restored and neglected old buildings. 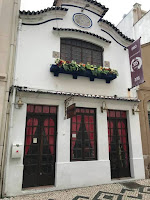 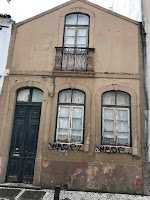 And there’s some rather fine new graffiti. 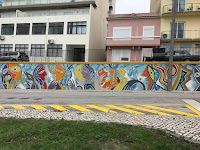 Nobody seems to get fretted about having to wear masks indoors. Maybe that explains their better covid rates. 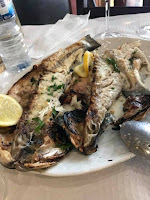 We strolled out at lunchtime to see if one of our old haunts was still open. It was. Buzia is one of those little restaurants in a side street, much favoured by the local population, always a good sign. We were offered a choice fish: salmon, sea-bream or cod. That bit was in English. Then we tried out our halting Portuguese. It seemed to work. So we had soup for starters, then sea-bream, copious amounts of sea-bream. One between the two of us would have been plenty. It came accompanied by potatoes, beans and carrots. Maybe next time we’ll see if they do chips. The whole thing, including wine and a tip, cost us 35 euros. Prices may have gone up a little since we were last here but that’s not surprising. We’ll see how it goes.