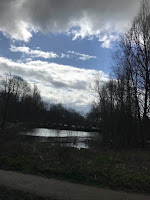 Despite the gloomy forecasts earlier in the week, yesterday proved to be a perfectly fine day, cool in the wind, occasionally cloudy but pleasantly warm(ish) in the sheltered spots when the sun came out. So we decided to organise a last minute family Diggle Chippy Hike.

We were eating fish’n’chips by the duckpond when my brother-in-law’s phone pinged him the news that the Duke of Edinburg had just died. We weren’t surprised - after all, he was 99 and not in the best of health in recent months - and got on with our day.

Our daughter had not managed to get herself organised in time to join us for our chippy lunch but planned to join us at some point later. Consequently we opted to return home along the canal tow path as we would not be encumbered with a baby buggy to manoeuvre through tight spots. So we cut a corner through a bit of daffodil-infested woodland and followed the tow path back to Brown Hill visitor centre, or rather what used to be the visitor centre but now seems only to be a cafe. 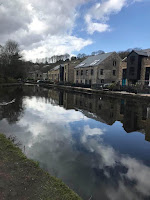 From there we went up the hill, specifically up the charmingly named Nicker Brow -cue for lots of jokes about roads almost named after underwear - to Dobcross centre and down the other side to home. On the very last stage, where you would be able to see our house if other buildings did not get in the way, our daughter phoned to ask where we were. Almost home! She was running late but decided to join us in the garden for a coffee. 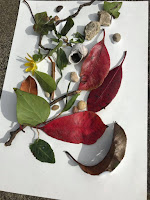 I got the old deckchairs out and we sat in the relative warmth and had coffee and biscuits while the four year old ran around collecting sticks and stones and leaves and such to make a piece of garden artwork.

New garden furniture has been ordered, a table and chairs so that we can eat outdoors if we wish. It was hard to find reasonably priced stuff as it appears that everyone and their grandmother have been buying up supplies of garden stuff. But I located some and delivery will take place tomorrow. This was obviously tempting fate a little too much and this morning it snowed on me. Ridiculous!

Into the evening yesterday it became clear that nothing else had happened in the world since the announcement of the death of Prince Philip. The PM programme and the six o’clock news on the radio was full of it. The Now Show, which I had been looking forward to, was replaced by a a tribute to HRH. And that set the pattern for the evening. An extended News at Ten on the television featured outside broadcasters who had all mysteriously acquired black coats and the studio newsreaders and zoom-guests all wore dark suits and black ties.

We didn’t keep the TV on long enough to wait and see what colour suit Owain the dapper weatherman would be wearing.

A couple of things struck me in the reports we did watch. First of all, communication from King Felipe of Spain to his Aunt Lilibet, giving his and Letizia’s condolences for the death of his Uncle Philip. A reminder that all these royal families are related. Secondly, there was an old interview where Prince Philip was asked did feel truly British. He replied that he was educated in the UK but was born in Greece, had a Danish parent and had relatives in most countries of Europe. So, more European than anything else! An interesting thought at a time when the UK, and specifically England, is determinedly not European!

And despite requests to cease protesting in Northern Ireland, out of respect, the rioting seems to be continuing. A victim of our not being European!