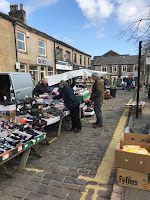 I’ve ridden in the rain and wind so often over the last six months that I think I had almost forgotten how nice it is to ride in the sunshine. Standing in a queue to buy fruit and veg in the market at Uppermill I was positively basking in the sunshine.

This does not mean that summer has arrived. The air is still quite cold but on the whole it’s been very pleasant out today,

The market at Uppermill is gradually getting back to life. The man who sells slippers was back, as well as the small stall selling herbal remedies.

On my way home, indeed almost home, I had an odd conversation with the landlord of the pub next door. The gist of it was:

“Do you eat pizza?

Right. Don’t cook any tea tonight. I’ll send round a couple of pizzas.”

We talked about other things, but that was the main purpose of his stopping to talk to me. I think this is a preemptive peace gesture, getting his apology-pizzas in before his beer garden gets noisy.

But they will be freshly cooked, wood fired pizzas. So who am I to complain? Never look a gift pizza in the crust! Or something like that.

After that I had another odd conversation, this time with one of the neighbours. Like us, she walks miles and miles, rambling all over the area. This morning she was on her way to the house across the road because the across the road neighbour was at a loose end and had asked her to “take her out for a walk”. The across the road neighbour has lived there for years and years but has never walked anywhere. Consequently the places we tell her we have walked to are completely unknown to her. But this morning she had asked the other neighbour to show her good places to walk to. She must be the latest person to start walking this pandemic!

I met another walker this morning on my way back from Uppermill. It was at our end of the Donkey Line. We had both paused to let a couple of dog-walkers get their over-excited little dogs under control. It turns out the dogs are old friends who have met for the first time in months and were extremely pleased to see each other - running round in circles pleased. The walker I spoke to told me she had moved her from Bristol just over a year ago (her husband was taking over as Methodist minister for Delph, Dobcross and Diggle, I think she said) just in time for lockdown. So she has had little chance to meet and get to know people but she has walked miles exploring bridle paths and footpaths. We were both impressed by the little dogs’ evident need for social contact.

Here’s something from an article about why we need social contact, and in particular actual physical contact, why hugging is good for us, and how it releases oxytocin, making us feel good:-

“The release of oxytocin during social interactions is context-dependent: only when a hug is wanted will the comforting and rewarding effects be felt. When touch is desired, the benefits are shared by both partners in the exchange. Notably, these partners don’t have to be human. Oxytocin levels increase in both a dog and their owner when the animal is stroked and petted, perhaps in part explaining why, when so many of us have been starved of touch during lockdown, the number of people owning pets has risen.”

So that explains the increase in dog-owning, and the resulting increase in dog-theft. And here’s an article about a different kind of pet being stolen. A giant four-foot-long rabbit. Amazing! The owner has sent out messages to possible abductors that Darius, the giant rabbit in question, is too old now to be used for breeding purposes, if that was what they were planning, so would they please return him.

Whenever I hear about giant rabbits, I am reminded of Marcel Pagnol’s novel Jean de Florette, made into a film with Gérard Depardieu as the eponymous Jean. Jean’s cunning plan to make his fortune was to breed giant rabbits on the patch of land he had inherited in Provence. His plans were brought to grief by the weather and by the machinations of Daniel Auteuil’s exclusionist local peasant. Jean de Florette was going to sell his rabbits at the market as a source of meat for his customers.  So I am afraid that when I heard that this rabbit had disappeared I found myself wondering how much “conejo con ajo” - garlicky rabbit stew - it would make!

And before vegetarians and vegans hold their hands up in horror at such an idea, I would like to offer this link to an article about how vegans seem to need “pretend” bacon and other meats, something I find hard to understand. So it goes.