Blossom. Birthdays. And getting out.

It seems that today is “blossom watch” day, an idea from the National Trust to get us out posting pictures of tres and bushes and hedges bursting into bloom. I do this anyway but they want me to do it the hashtag #BlossomWatch. We’ll see.

Annie Reilly, the blossom programme manager at the National Trust, said she hoped people in the UK would begin a new tradition emulating hanami, the Japanese custom of relishing the fleeting sight and scent of blossom.

She said: “There has been a lot of research into the connection between enjoying moments in nature and feelings of wellbeing, and with social-distancing measures having eased slightly, meeting a handful of family or friends under a blossom tree could be the ideal way to lift spirits and re-connect with people. We want to embed this tradition for the future, and if ever there was a year to appreciate the joy and comfort of nature, surely 2021 is it.”

I could go along with that.

Coincidentally, today is also our daughter’s birthday. There will be cake in the garden later. Other things are going on but as they are being organised mostly by her 23 year old daughter the arrangements are a little up in the air. Pinning her down to arrangements has been rather like herding cats, to use a favourite expression of an old friend of mine. At around midday, as I type, I await further information.

The last few days have been rather busy, running around all over the place. On Wednesday there was my usual cycle to the market. On Thursday, I had arranged to meet an old friend for a long ago organised and many times postponed, for Covid restrictions reasons, walk around Uppermill. As she wanted to meet mid-morning I set off from home at around 10.00am, while there was a still frost on the grass in places the sun had bot yet reached. And the air was still cold. So there I was, sporting sunglasses and woolly gloves, rather like being on a skiing holiday.

I had planned a route around, above and through Uppermill, carefully chosen for the frequency of benches as my friend needs frequent sit-downs. The first was on Den Lane, looking down on the park and children’s playground. In a few weeks that stopping place, what the Spanish would call a “mirador” will be useless as all you will see will be leaves on the trees which have grown tall there.

After a sit-down, half a cigarette - for my friend not me - I gave up about 50 years ago and she is cutting down - and a chat - quote: “It’s easier to chat sitting down than walking.” - we moved on to the end of Den Lane and went down into the picnic area below the Brownhill Nature Centre, where we had another sit-down and half a cigarette. We considered coffee at Brownhill but decided it was too busy. So we used their loo and went on our way. 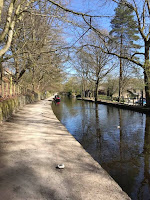 The tow path took us back towards Uppermill. There were ducklings in the canal, the first I have seen this year. I proposed crossing the river at the stepping stones - the same stepping stones that my Spanish sister said I “made” her cross during her last visit - but my friend declined and so we went round. Back in Uppermill we stopped for coffee and cake sitting outside a high street cafe, but no half cigarette allowed. For that we had to head to the park and another bench.

Then I helped my friend locate her car and we went our separate ways, having caught up,on all our gossip and set the world to rights. 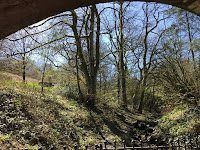 Phil met me half way home and we discovered an new pathway going under the Donkey Line. How had we not found it before? 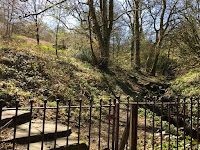 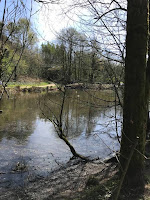 Yesterday we had a Diggle Chippy Hike. Fish and chips at the duckpond in the sunshine.

It’s not such a bad coming-out-of-Lockdown.