This morning I didn’t go for a run as I needed to make sure Phil got himself out early to catch a bus. Yes, to catch a bus! All togged up with his face-mask so that he could go to the eye clinic in the centre of town. 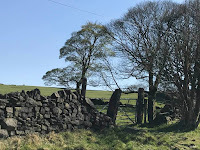 I suppose I could have run later, but by then I was up and dressed and breakfasted. I prefer to run before breakfast. Just one of my things. So after Phil had left, and after I had hung the washing out in the sunshine in the garden, I set off to walk up Lark Hill. It was positively balmy out there.

At the top of the hill I continued along the path and after a while I spotted ahead of me a dog-walking lady who was stopping every so often to pick up litter. What a noble soul! Getting closer, I realised I knew her. Long years ago, when I was a new, young teacher, I taught her two daughters at secondary school. And then she began to work as librarian in our little village library. Every so often I run into her as she lives just outside Dobcross. I also run into one of her daughters running along the Donkey Lone but that’s a different story. 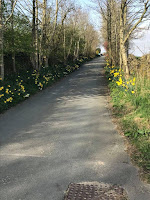 As we strolled along admiring the daffodils at the side of the road, she told me that she had planted most of those daffodils. She began planting them years ago, a few clumps every year. It took her about 10 years. How public-spirited! She doesn’t think she could do it now. She’s in her 80s after all but she’s still out and about, walking her rescue dog and picking up litter! An example to us all. 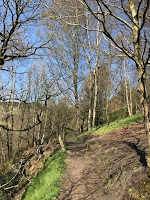 After we went our separate ways, I went down the hill from Dobcross and onto the “forest path”. The muddy puddles are completely gone.

At the start of the path, in the garden of one of the oddly named “Sycamore Cottages” - oddly named because there are no sycamores! - I spotted this strange contraption. 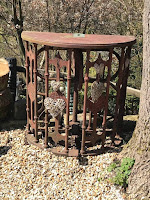 I sent the photo to my 23 year old granddaughter to see if she knew what it was. No idea! She’s showing her youth. It’s an old turnstile, the kind you used to find at the entrance of ladies’ toilets. You put a penny, an old penny, in the slot and then you could push your way into the loo. Hence the expression “to spend a penny”. Now the turnstile has become a bit of garden furniture.