Some thoughts on getting out of lockdown. 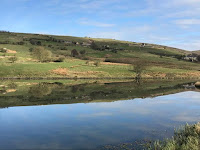 The weather is continuing to favour this much awaited first-week-out-of-lockdown, well, partially out of lockdown, a step along the road, following the map, trying to keep up with the metaphors. The sun was shining nicely earlier, and the wind has mostly dropped, making the local millponds into excellent reflection traps. 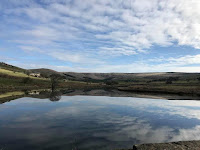 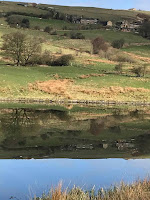 Out first thing I stopped for a chat with an elderly gentleman who was clambering up grassy banks to take photos of lambs. Like me, he stops umpteen times on his walks to take pictures we he posts here and there to cheer up city centre dwelling friends. I draw the line at scrambling up grassy banks as a rule though.

It may be fine and sunny but it continues to be cold. We have a tub of rainwater in the garden which has a thickening circle of ice on the top. It doesn’t get enough sunshine for the ice to do more than sort of detach itself from the side of the barrel without fully melting. And so each day it gets a little thicker. There was also a skim of very thin ice on the smallest of the ponds around here but the mill ponds proper were ice free.

That’s enough about weather, I think.

Apparently there were huge queues outside shops such as Primark at 6.00am yesterday. The stores were planning to open early, at 7.00am, which seems to me a crazy time to be out buying cheap clothing, and they were staying open until 10.00pm. Goodness! I wonder what people needed so desperately. While I can understand the desire to look at clothes before you buy, I can think of more enticing stores than Primark. Maybe I am a snob after all!

“I wrote a bit of fiction in my head this morning: Labour won the election, the pandemic came, Corbyn did just as the WHO recommended, put the NHS in charge, the death rate was much lower but freedoms were restricted, there was a coup led by....oh I won't go on...”

I’m trying not to say anything more about the D of E. so here is John Crace’s column from the Guardian, which I think says quite enough.