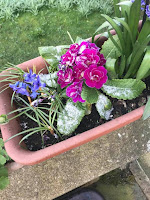 This morning there was snow on my spring flowers! I was prepared for that because there was sleety snow on the attic skylight windows. 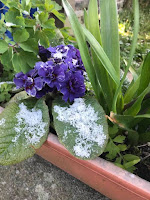 By the time I was up and about the sky was blue again, however. Such odd weather! 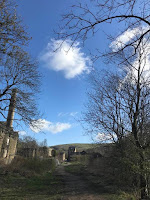 Later I decided to hang washing outside to dry. After all, it’s windy enough for the wetness to be blown out of the washing. By the time I came back indoors my fingers were colder than they’ve been in years, that cold that hurts! When I went to hang out the second lot some of the first was semi-frozen on the line. Hopefully by the time the sun gets round to the garden it’ll thaw out enough to get dry. We shall see! 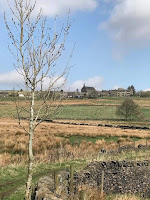 Yesterday we went adventuring again. I was about say that all the family went but, of course, the southern bit of the family couldn’t take part. Someday soon they might be able to travel north again. Or we’ll travel south and go adventuring there. That’s as far as our summer plans have got up to now. And the teenage grandson here decided at the last minute not to join us. We last saw him on Christmas Day. Pretty soon I’ll have forgotten what he looks like. I can imagine myself walking past him on the street and not recognising him! 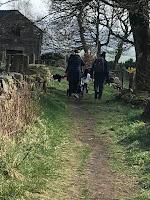 The rest of us stomped up the hill to Heights, taking a slightly different route to our usual one at one point, involving lifting the baby buggy over stiles but worth the effort. 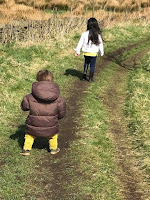 Even the smallest member of the party got to walk some of the off-road track. 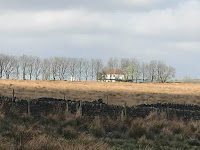 And the dog had a good look at the churchyard. 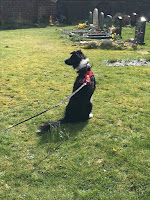 Out in the wider world pubs and restaurants are preparing for an imminent opening of sorts, people are still going on about vaccine passports being an infringement of our civil liberties and now there is talk of all of us being offered twice weekly self-testing kits, to help ease us out of lockdown. Presumably you would still need some way of demonstrating that your self-testing had proved negative before you could go anywhere. Someone needs to sort out the bureaucracy.

Meanwhile we are still not going very far but according to this article around 8,000 tourists are coming into the UK every day. And it’s unclear whether all of them are quarantining! Just what is going on?

And here’s an interesting bit of reporting:-

“Dozens of members of Britain’s land-owning aristocracy have claimed under the taxpayer-funded furlough scheme to pay staff at their ancestral estates and personal businesses.

Analysis of publicly available data reveals the names of at least 50 nobles, including dukes, earls, viscounts, barons and marquesses, who have drawn on public funds.

The list includes the owners of vast inherited estates with a combined area nearly the size of Worcestershire, as well as hereditary peers already paid by the taxpayer to sit in the House of Lords, and the owners of multimillion-pound art collections.

Details of the aristocracy’s use of the furlough scheme emerged after the Guardian revealed last month that tax exiles, Saudi royals, oil-rich gulf states and multi-billionaires had also drawn on taxpayer support to pay furloughed staff.”

Now, I know that not all landowners are super-rich and they have to pay for the upkeep of their estates and so on and so forth. But even so, it does rather smack of an abuse of the system, especially when small businesses have been going under, some of them because they did not qualify for government help. Just a thought!