Digital life. Chocolate eggs. Out and about!

Everyone’s lives have become more digital over the last year. It’s got good and bad sides to it.

My daughter and I were talking about the fact that her eldest daughter and that daughter’s housemate live in a kind of virtual world with friends in faraway places, friends they have no chance of meeting at the moment. A few of these are actual friends who used to live here and have returned to their faraway places but more are people they have got to know, in Australia and Argentina and goodness knows where else, through playing online computer games. In some cases they have also done a bit of direct video-calling as well, which is reassuring because in this day and age there is no knowing what kind of oddballs might be befriending a couple of young women in their early twenties.

They need some more real life friends. This is one reason why people need to get back to their work places, even if only on a  part-time basis, continuing to work from home the rest of the time. Quite apart from learning on the job by seeing the example of older role-models in the work place, that social aspect of work is really important. How do you get to know anyone, decide whether you really fancy someone and would like to spend more time with them, maybe even marry or at any rate set up a home with that person? How do you do that if you never meet people in the flesh? It’s a bit like going to an all-girls school and thinking that you would really like a boyfriend but never get a chance to meet boys! Online dating is not quite the same.

One of the problems I’ve read about that has apparently popped up as a result of remote learning is “parent bombing”. A hardworking teacher would an online lesson going on, usually at the same time as directly teaching a bunch of children who had to be in school because they were children of key workers or children at risk. In the middle of all this up would pop a parent, supervising the home schooling, to put in their two penn’orth and criticise the teacher’s way of handling things, the materials they were using and so on. Some would be quite abusive! Wow! It’s been hard enough for teachers without extra problems being added to the mix. On the plus side some parents are taking more interest than they ever did before in the nitty gritty of what and how their children learn but as the general secretary of the NASUWT said, “Schools need to be absolutely clear about the kind of behaviour expectations that they have both for pupils, and also for parents”.

The teachers I know are mostly glad to be back in the classroom. It’s a job you do because you enjoy the contact with young people. The retired teachers I know, friends and former colleagues, are all happy not to have had to deal with the problems of online teaching. Zoom meetings and video calls for social reasons have been quite enough for us.

That’s enough about that.

It’s Easter Sunday today. My daughter has organised an egg hunt around her house for her younger offspring. Everyone seems to have bought them Easter eggs, me included. They’ll have supplies of chocolate to last them for weeks, as I know that my daughter won’t let them eat them all at once! 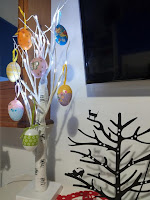 I read yesterday that there has been an Easter egg shortage this year. Places like Waitrose have had empty shelves. And it’s not just Waitrose. More mundane Asda has apparently sold record numbers of chocolate eggs. One shopper said that had she known there would be a problem she would have bought them in the New Year! An explanation is that people have wanted to start celebrating early and so have bought extra eggs! Really?! It’s a theory, I suppose, and goes along with having an “Easter Tree” in your house! When did that become a things to do? 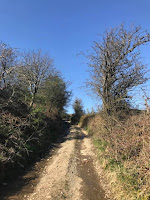 We’re going to counter all the chocolate eating by doing a family adventure up to Heights Church this afternoon.

We’ll go via quiet country lanes, rather than the kind of old tracks that Phil and I followed yesterday. 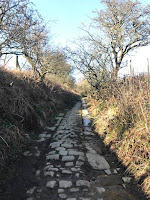 We turned off well before we got close to Heights and went in the direction of Castleshaw reservoir and then circled back to rejoin one of our usual walks past the millponds.

It was a beautiful afternoon, if a little cool! Today looks set to give us more of the same, after a very misty start. Tomorrow it might well snow!