It’s another bright but cold day. Surprisingly good for drying washing. Yesterday’s lot dried well, so today I have put a load of bedding in the washing machine and then out on the line to dry, hoping it doesn’t get blown away! Which is not beyond the bounds of possibility. 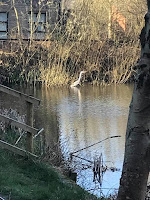 I spotted the heron out fishing when I ran round the village this morning. No human fishermen today! The other day I saw a chap who had caught an enormous fish, almost big enough to be the sort that can swallow tiny ducklings. I’m not sure whether the fishermen (or are they technically  anglers?) who go to local ponds are supposed to thrown back what they have caught or if they can take it home for tea. One fisherman/angler told me it had been so cold in the morning that he had had to go home to get warmer socks and boots. 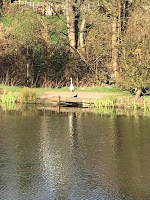 We walked out in the chilly sunshine in the mid-afternoon yesterday and discovered a fishing spot that we knew existed but had never properly located. We like to walk through what we jokingly call the “forest”, a wooded area just below Dobcross village but the most direct access route to it goes behind a small local factory along a path that often becomes very muddy. Yesterday we took a different path down from the main road into the trees. Halfway down, on a whim we turned off onto a smaller path and there it was, a small pond, probably originally a mill pond. 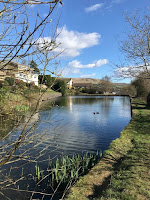 Why we have never come across it before is a mystery. It could be just because we weren’t actually on the lookout for it before but recently our daughter mentioned it and wondered where it was. Now we know, for what it’s worth.

None of the various ponds and canals and stretches of the River Tame we see around here have monsters in them ... at least as far as I know. The worst are probably the duckling-eating carp. I came across a report of a lake in Canada, Okanagan Lake in British Columbia, where dark, curling waves are supposed to signal the presence of Ogopogo, a monstrous serpent lurking below the surface.

Ogopogo is not the original name of this monster; that name apparently came from an old music-hall song. The Syilx Okanagan Nation, one of the First Nations whom we can no longer call Red Indians, named it n ̓x̌ax̌aitkʷ (pronounced n-ha-ha-it-ku), and would like to claim their water spirit, not a monster at all, back again. They say it can take the form of a dark serpent with antlers but most of the time it keeps its true form: water. Traditionally they would sing to the spirit and present it with gifts of sage and tobacco and salmon but early settlers thought they were making sacrifices to a monster. And so a Loch Ness style legend was born and, like Nessie is “seen” from time to time, creating great excitement.

The city of Vernon owns the copyright to the name Ogopogo and uses it in all sorts of tourist advertising and other stuff. Just recently they gave a writer permission to use the name in a children’s story, no doubt receiving a payment for that. And now, in one of those cases that keep cropping up at the moment, the Syilx Okanagan Nation are protesting that they want their heritage back. Understandable!

Maybe we all need to rethink what we do with old traditional things.