Am chortling you say I'm 'totally unethical'. Have you only just discovered this? You read my novel, 'Seventy-two Virgins'. It's a completely amoral bit of work, packed to the gunnels with racist, antisemitic and sexist gags and I'm proud of it!

Michael Rosen, of course! Commenting in his way on current events.

It seems the Cummings-worm has turned and is now telling tales out of turn on ... I was going to say his friend, but maybe he and Johnson were never friends but just had a working relationship. But now the s**t seems to have hit the fan and even Tory MPs are demanding explanations for all the sleaze. Will we ever know the ins and outs of it? I doubt it.

As regards the refurbishment of the PM’s residence, I just remain amazed at the supposed need to redo the decor for every new PM. By the way, I feel the same about the White House, which apparently undergoes even more expensive refurbishment with each new occupant. I can understand that PMs and presidents are going to be actually living there and need to feel comfortable with their surroundings, a bit like students in their university accommodation. (I shared a flat for a while with an art student friend who painted the wall deep purple.) But presidents and prime ministers are not students and surely they have more important things on their minds. After all, Downing Street is not the prime minister’s “forever home”, as some people would say. Most of them have another home somewhere else in the country. They can indulge their fancy there and, provided the decor at Downing Street is not too horrific, surely they can put up with the work-home for a few years. And if Mr Johnson wants to spend tens of thousands on the flat, let it be his own money. That’s my take on it anyway.

But the sleaze needs to be investigated. 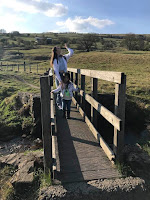 Yesterday we celebrated our daughter’s birthday with a bit of a family get together in the garden - lighting and then blowing out a token candle separate from the cake to avoid any chance of germs contaminating the icing - in the warm sunshine. 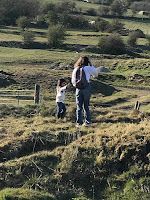 In the late afternoon, before singing happy birthday and eating cake, we took a family walk down to the duckpond and the Pooh-sticks bridge, once again thanking our lucky stars that we can stroll out into the countryside.

None of the photos include the birthday girl. That's how it goes sometimes. 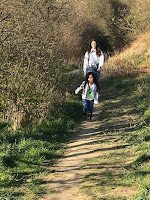 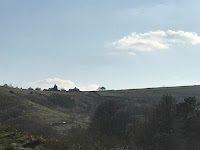 Coincidentally, yesterday was the anniversary of the Kinder Scout Mass Trespass back in 1932. The folk singer Ewan McColl, then a young, unemployed communist known as Jimmy Miller, and more than 400 others participated in the mass trespass at Kinder Scout, the highest point of what is now the Peak District National Park. Apparently being in the countryside “breeds a spirit of revolt” among the working class. At the time access to such moorlands was limited to rich folk who went huntin’ and fishin’, or in the moorland areas shooting grouse. So the moors were used for just a short time every year, in the grouse hunting season.

So a move was made to demand the “right to roam”. Partly successful. Today, 8% of England’s land is accessible to the public, whilst half of the country’s total landmass is private: property of the 1%. And the government would like to change it ... for the worst ... wanting to criminalise trespass, which is still not an actual offence, and to restrict access to open land ... again! More trespasses are being planned.