Celebrating Easter. Thoughts about barbecues. The problems caused by the freedom to meet outdoors.

On the Today Programme on the radio yesterday they were talking about celebrating Easter, or more specifically decorating your house and garden for Easter. It would seem that a whole lot of people didn’t do the sensible thing and post presents to family and friends they couldn’t see. Consequently lots of children, yes, children!, didn’t get their Christmas presents. So they expect to get Easter presents. Not just Easter eggs  but actual presents! Okay! So Easter this year sort of incorporates cancelled Christmas! Again, okay!

As regards decorations, the advice was it could be anything to do with eggs and rabbits. Not a mention of this being a religious celebration, which I suppose it isn’t for most people. But they went on a bit about how important a “holiday” Easter is in many other countries of Europe. Which it true, because it’s a religious thing. Instead of Easter egg hunts, they have processions involving the statues from their churches. 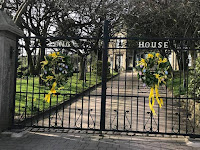 And then, out and about, I came across this gate, the entrance to a big posh house, decorated with ... yes ... Easter wreaths, festooned with eggs. All of which brings us back to Easter having sort of replaced spring festivals, with eggs as symbols of rebirth and renewal. Which in turn brings us back to the Christian story of Jesus rising from the dead on Easter Sunday.

And here I am, ranting on about it all as if I still believed in all the stories! I think I am just a bit of a traditionalist but I also feel that these things are part of our culture and should not be forgotten. And life isn’t all about the commercial aspects of celebration, the cards and presents.

Anyway, it seems that rather a lot of people bought huge turkeys for Christmas and then didn’t have the massive family gatherings they planned. So they put the turkey  in the freezer with the plan to cook it for Easter instead. They still won’t be able to have massive family gatherings unless they are two large households getting together (which they can do without needing to adhere to the rule of six) in one of their gardens. This observation led to instructions and advice on how to barbecue a turkey, without chopping it into smaller bits. You need a fancy modern barbecue, probably gas-fired, with a temperature gauge and a lid you can close, apparently. So basically an open-air oven! Why not just cook the bird in the kitchen and serve it outdoors?

Oops! I forgot! The men-who-love-barbecues will be robbed of their purpose in life! As you might have guessed, I am not a great barbecue fan, possibly because I am not a great meat eater, especially not great lumps of charred on the outside and raw in the middle meat!

Portable barbecues and fire pits have come in for some criticism this week. (By the way, I had no idea what a fire pit was, other than a hole you might dig to make a fire in for outdoor cooking, but it seems you can buy folding contraptions which support a piece of fireproof material on which to light your outdoor fire! Who knew?) they are among the disposable items that people have been disposing of by dumping them wherever they have been picnicking and barbecuing in the countryside. Or indeed, in city parks.

I get quite ashamed and despairing of my fellow countrymen when I see reports of the masses who have thronged to open spaces to enjoy their new-found freedom this week, leaving mounds of litter behind them. Worse still, it seems that many have used the edges of parks, where the park meets the gardens of nearby residents, as toilets. Some of this is the result of their being a lack of public facilities in parks and open spaces but even so that does not make it any less unpleasant for the people who have to love with the smell!

Of course, it’s easy for me to criticise because I am lucky enough live within a few minute’s walk from open country. I haven’t been cooped up in a town centre flat. But then, I have never really felt the urge to grab several six-packs of beer and go and drink it in a park so that I need to pee just next to some stranger’s garden fence!

It’s not just parks that have suffered though. I have complained quite frequently about the state of some of the country walks, churned up by multiple walkers and cyclists but also by motorised vehicles, leaving great ruts that dry out into difficult terrain. There are places we have walked with our daughter pushing a baby in a buggy which would now be impassable for her. There was a report on the TV news the other night about the big problem of trail bikes - those noisy little off-road motorbikes - and quad bikes being ridden illegally over moorland areas not far from here. They are causing havoc for sheep farmers in particular as their pregnant sheep are being frightened into aborting their lambs.

What’s more, the people churning up the ground with their wheels are making life difficult for the mountain rescue people. They are being called out more frequently as more and more walkers turn an ankle or strain a leg muscle falling over the hardened ruts in the mud. Then those very ruts make it difficult, sometimes almost impossible, for the mountain rescue all-terrain vehicles to reach the injured folk and bring them down.

There is apparently a new and revised countryside code to remind us all how to behave out and about. This revised Countryside Code will encourage the unprecedented number of domestic holidaymakers to “be nice, say hello, share the space” and “make a memory” when they visit parks, coasts, woods and farmland this summer.

The new guidance – the first major revision to the code for more than a decade – asks visitors to stay on footpaths, keep their dogs “under control and in sight”, clear up dog poo, and “take care with BBQs”. But countryside campaigners and wildlife groups have criticised the code’s failure to ban disposable barbecues or request dogs to be kept on leads on nature reserves or around livestock.

Another problem is actually getting people to read it. 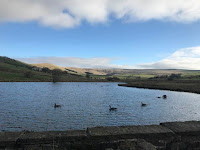 That’s enough moaning and groaning for one day. It’s a beautiful day. We should organise ourselves to go out and about somewhere, preferably one not too popular with the portable-barbecuers and beer drinkers and trail bike riders.