Protesting. Standing by your beliefs. Container ships and ships in general. Park life.

People all over the country are protesting about the bill curtailing our right to protest. Jeremy Corbyn is making himself heard again. Addressing the reasons for the protest in a video posted on Twitter in Friday, he said: “The right to protest is precious. Protest movements make history, from the eight-hour working day, to the vote for women, to the right for equal pay, the rights we take for granted had to be won through protest. We took them; they weren’t handed to us by the rich and powerful.

“From opposing apartheid to the Iraq war, I’m proud to have protested against injustice and defended the right to itself. That right, which gives a voice to those often unheard is once again under threat from a dangerous bill which effectively criminalises peaceful protest.”

He’s no longer the leader of the Labour Party and he’s been criticised left, right and centre but he seems to be undaunted and is carrying on doing what he’s always done. It’s nice to see someone stick to their ideas.

We’ve all watched and listened to and read the saga of the container ship that blocked the Suez Canal. I read today that it had 20,000 containers on board. 20,000! Have you seen the size of those containers? Each one is like a big lorry. 20,000 is a crazy amount of stuff to carry on one boat, however big. No wonder such boats go through the Suez Canal and not round the stormy Cape of Good Hope. Imagine trying to steer that in a storm.

“Imagine being the captain of the first ship to pass through the Suez after it gets unblocked and knowing that you have the potential to do the funniest thing that anyone has ever done ever.”

So the Guardian got him to write about it, expressing, among other things, the view that many people were sorry the boat was freed because it gave us something other than Covid to think and talk about.

On the subject of ships, here’s a question from a section in the Guardian where people send queries about odd stuff:-

“I’d be fascinated to know why do we sometimes refer to ships, countries, the church, the Earth, the moon and cars among other things as “she”? Is it the same in other languages?”

Here are some replies;-

“Ships are always referred to as females because they are always looking out for buoys.”

“Ships were so called by their sailors because they were considered a protecting force, like a replacement mother while away at sea.”

“In 1593, Elizabeth I, the Virgin Queen, declared she would have no marriage to any, other than England. Since then, any country, ship or celestial body to which a man might devote his soul has henceforth been referred to as “she”. “ 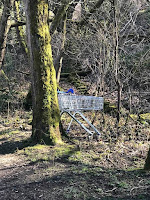 Yesterday I walked out in the afternoon sunshine to meet my daughter with her small people in the park in Uppermill. En route I spotted a shopping trolley abandoned on the Donkey Line bridle path. How did that get there?

The park was moderately full, unlike the litter bins, which were full to overflowing! Lots of disposable coffee cups, expanded polystyrene trays from the chip shop, paper packaging from the bakers, tin cans, plastic bottles and, inevitably, poo-bags! All spilling out onto the path, encouraging others to add to it. Someone from the local council needs to organise bin emptying at regular intervals on days when the parks are full of people. It’s surely not rocket science. 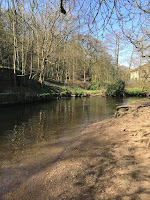 It was, however, a lovely afternoon, after such a cold and chilly start in the morning.

The River Tame makes a nice little almost beach by the park. 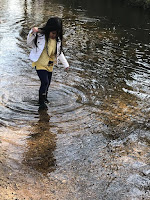 Older children, pre-teens by the size of them were less careful about getting wet. Someone had set up a rope swing, a bit of stout branch tied to a rope, providing a chance to swing out over the river. Of course, after a few goes the youngsters were first dipping a knee in the water and the falling off into the water. Not deep enough to be dangerous but wet and cold enough for a soggy walk or ride home afterwards. But if you can’t do that when you’re 11 or 12, when can you do it?

Today is chillier again, although the sun has been trying to break through. Phil is talking of mowing the lawn! A sure sign that spring has arrived even if they are forecasting snow in the next few days!