Looking at the sky. Wild garlic. Thinking about names. Looking forward to stuff. 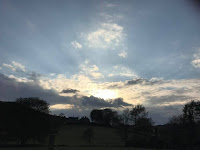 A clear blue sky is a wonderful thing, reminding us of the immensity of the universe and other such poetical/philosophical stuff, reassuring us that we can go for that walk or picnic with a reasonably good chance of not getting rained on. But a good cloudy sky in the evening is much more dramatic. I walked out in the early evening yesterday and was reminded of the truth of this. 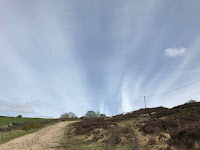 It doesn’t even need to be the evening, of course, for the clouds to add a bit of character to the sky. Here’s a picture taken on a recent wall up Lark Hill.

It is possible, indeed very probable, that such ramblings about the advantages of cloudy sky are just a way of compensating for the blue skies having disappeared snd the temperature having gone down again.

I wrote recently about wild garlic. I now have a nice little pot of it sitting on the garden wall, which I need to remember to water from time to time. I suspect that even when it rains I may need to keep an eye on it as it’s the sort of pot that easily gets waterlogged. I don’t want to drown the stuff after having carefully replanted it. It seems, however, that I was ahead of the trend, or maybe started a trend, for Tim Dowling has been writing about it in the Guardian, 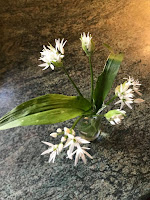 offering recipe ideas and warning us not to pick lily-of-the-valley leaves by mistake if we go collecting wild garlic. The leaves are fairly similar, he says, although I don’t really think so. But lily-of-the-valley is toxic, he reminds us, especially to small children and dogs. Who knew? Well, I did as a matter of fact because Walter White used it in “Breaking Bad”. Who says watching box sets is not instructive?

The lily-of-the-valley is a very pretty little flower, but then, so is the wild garlic flower.

I read this morning that there are moves afoot to change the name of Snowdon, Wales’s highest mountain to Yr Wyddfa, its original Welsh name. Snowdonia should also be renamed Eryri. It’s rather like Peking being known nowadays as Beijing, in line apparently with Chinese pronunciation, and other such modernisms. The Welsh renaming has the disadvantage that none of us outside of Wales will know how to pronounce the names. Otherwise, well, let them get on with it. Maybe people will start to talk about climbing “the mountain previously known as Snowdon”.

“According to the park authority, the Welsh name Yr Wyddfa means grave and myth has it that the giant Rhita Gawr was buried on the mountain following a battle with King Arthur. It saysSnowdon comes from the Saxon snow dune, meaning snow hill.

Eryri had long been thought to refer to the Welsh name for eagle – eryr – but is now believed to originate from the Latin oriri, meaning to rise.”

I do wonder about the connection to “eagle” though. After all, we call an eagle’s nest an eyrie. Is there a connection?

Welsh tourist info already refers to Snowdon and Snowdonia by both names together, maybe introducing the Welsh names by the back door. After all, it’s their heritage and they have the right to protect and promote it.

Other mountains that have two names, one “native” and one anglicised are:-

Ayers Rock in Australia, reverted to its aboriginal name of Uluru.

I’m in two minds about all this renaming. Will we ever see campaigns to call Paris by it’s original name Lutetia, or at the very least change the spelling to Paree, in line with French pronunciation? Should all the UK cities ending in ...chester or ...caster revertbto their original Latin designation? Or should we be shouting for London to be called London everywhere and not be known as Londres or Londra? We’ll have to wait and see.

On the subject of waiting, I spotted this article headline this morning:

“Sometimes waiting is better than bingeing. Ask the millions who watched Line of Duty.”

Adrian Chiles was writing about the pleasure of anticipation, the joy of looking forward to something rather than having instant gratification. And mostly I am on his side. There was great satisfaction to be had from saving up for something and eventually going to buy it, ordering something and waiting several weeks for it to arrive. (Actually, the latter can still happen, depending on who you order from.)

Incidentally, we have been watching Line of Duty. Having got over the initial oddness of not needing to head for Netflix or BBC iPlayer, of not being able to pause it to make a cup of tea or to answer the phone, even of not having subtitles, it’s been good to get back to once a week watching. We do, however, have to set reminders for ourselves so that we don’t forget to tune in at the right time on the right day. Modern problems!