Crisp, cold morning. The oddness of the world: refusal of the vaccine and other oddities. Drinking with Springsteen. 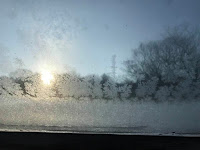 Jack Frost patterns on the skylight windows this morning.

Heavy frost on the cricket ground.

Interesting shadows of trees on the frost. 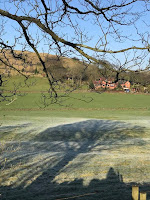 It’s a fine sunny Sunday but it was very cold to begin with. It’s the price you pay for clear nights with a big bright moon. I am reliably informed that the dawn was lovely but that was by someone whose house has a big picture window looking out onto one of the millponds and the hills beyond. He was returning from walking his dog as I went by his house and he told me that the sky was full of amazing colour at 6 this morning.

For one thing, I wasn’t awake at 6.00 and for another, even if I had been the hilly ridge behind the houses opposite ours prevents us from seeing the best of the sunrise. Sunrise for us - actually seeing the sun pop up - is usually a bit later and in more subdued colours.

But it is a fine day.

It’s a funny world we live in. We’re constantly told at the moment that we’re doing really well with the “roll out of the vaccine” (for some reason the terminology annoys me - I think it’s a general discomfort with jargon) and yet according to some sources more than a fifth of healthcare workers in England have not received their first dose. This is not because they haven’t been offered it; this is apparently people not taking up the offer. It is generally believed that acceptance is higher among those working directly with Covid patients. Well, you would hope and expect that to be the case. But why isn’t everyone working in healthcare shouting out to receive the vaccine? Is it a question of pay? Are they afraid of an adverse reaction causing them to have to take, possibly unpaid, time off work? Or is it the old thing about nurses making the worst patients and they are all afraid of needles?

And then there are all the people getting agitated about the possibility that they might have to carry around a card proving they have been vaccinated. I can understand the objection to having to provide proof of identity when you go to vote at a polling station; there are sections of our community who would find it hard to show such proof and they could be prevented from voting. But I don’t see why most people, or indeed anyone, would object to carrying a card showing they have received the vaccine; most of carry a load of cards around with us anyway - credit and debit cards, loyalty cards, library cards, driving license and so on. So a card that going to make it easier for you to get on with your life should not present a problem. But there are those who regard it as an infringement of their personal freedom. And having to prove you have passed the driving test isn’t??

I shouldn’t even get started on abuse on social media but there it is. Sonia McLaughan is a sports reporter apparently. I wouldn’t really know because I rarely read or watch sports and never rugby reporting. Anyway it seems she interviewed Owen Farrell, rugby player, and was quite rigourous in her questioning. This led to a whole host of Farrell fans sending her abusive tweets. Why do people feel they have the right to do that? Isn’tmshouting at the telly enough?

Across the pond one of my heroes, Bruce Springsteen, has reportedly had drink-driving charges against him dropped. Back in November it seems he was out and about on his motorbike and met some fans in New Jersey’s Gateway National Recreation Area. He had a couple of shots of tequila with them. Do American Springsteen fans carry tequila around with them? Or maybe there is a bar. Anyway, how exciting for the fans to go to the recreation area, see The Boss on his motorbike and share a drink with him. But the police stopped him because they said he was “visibly swaying back and forth”. I bet the arresting officer has dined out on that story quite a lot since November! In the end he was found not guilty of drink-driving but, yes, guilty of drinking alcohol in a national park. Well, that settles the question of whether or not there is a bar!

He admitted knowing drinking alcohol in the park was illegal and was fined $500 plus $40 in court fees. “Mr Springsteen, I need to know how long you need to pay that fine,” the judge, Anthony Mautone, told him. “I think I can pay that immediately, your honour,” he responded. Yeah, I reckon he could afford that.

Quick to disassociate from a possible wrong-doer, Jeep stopped airing its  Super Bowl advert starring Bruce Springsteen in the wake of the allegations coming to light. However it doesn’t seem to have worried Barack Obama. “Earlier this week, Springsteen launched a new podcast series with Barack Obama, entitled Renegades: Born in the USA. “Bruce and I have been on parallel journeys, looking for a way to connect our own individual searches for meaning, truth and community with the larger story of America,” Obama said in a trailer advertising the series. “We still share a fundamental belief in the American idea. Not as an act of nostalgia, but as a compass for the hard work that lies before us.””