Cold weather oddities. Interpreting the rules, especially for children. Being obsessed with grammar and spelling.

My weather app says it’s -2 outside. The windchill factor then comes into play and it feels like -10. I went outside without a coat, just to take some recycling out to the various bins and thought I was going to turn into an icicle. 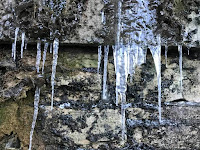 My attempts to photograph icicles with my phone are, of course, disappointing. They are never as spectacular as the real thing. 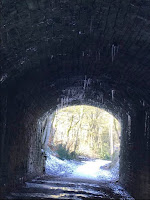 Today I found what I suppose is a professional photo, captioned “Icicles hang from the roof of the Hopton tunnel on the High Peak trail in Derbyshire.” That’s the photo I have been aiming for.

The trouble is that even if I had a fancy camera I would probably be too impatient to do all the settings and apertures and whatnot. I like to point and click. Usually it works fine. But even that lets you down, such as this morning when the heron took flight from the river alongside the bridle path. Of course my phone was in my pocket and all I could do was admire the beautiful bird as he flew past me. One day my phone or my camera will be in my hand and ready just at the right moment! Well, maybe!

Despite the bitterly cold weather, I heard a news report the other day about wildfire up in one of Scotland’s islands. Then yesterday I read about a large fire that had broken out on Dartmoor. Isn’t that kind of thing supposed to,happen in times of hot, dry weather? Well, according to an expert they spoke to about the Scottish fire, extremely cold weather can dry out undergrowth in a similar way to long hot spells. Consequently if someone drops a lighted cigarette or maybe lights a bit of a bonfire and neglects to extinguish it properly then it can easily spread like ... well, like wildfire. Who knew?

As regards the Dartmoor fire, here’s a bit of the report:

“Pictures on social media showed a large blaze stretching across a wide area and illuminating the night sky.

The fire is thought to be on a remote stretch of the moorland and no residents or animals have been injured, according to reports.

Social media users said the blaze could be seen from parts of Cornwall.

A spokesperson for Devon and Somerset fire and rescue service said: “Our crews are currently at [nearby village] Peter Tavy, but we haven’t actually accessed the fire yet. We have five pumps and various special appliances.”

The service warned people to avoid the area.”

No doubt folk will be out taking pictures!

As both our smallest grandchildren are supposed to be isolating because of Covid cases among the staff at their nursery, my daughter and I have debated the strictness or otherwise of the rules. We checked online. Basically the children, or anyone else isolating, can go out in the garden but that’s it. No walks, not even with the immediate family, which seems a bit over the top, especially as tiny children will hardly be spending their isolation time locked in their bedrooms.

Interpretation of the rules and regulations keeps popping up in the news. This week, apparently, a policeman told two children somewhere in the London area that they had to go home and play in their own garden. The children’s father had taken them to build a snowman in a local playground as they have no garden. Downing Street clarified that children could use playgrounds for exercise but not for socialising. So that clears that one up. It was okay for Matt Hancock (I think it was Matt Hancock) to take his kids to play rugby in the park because sport is exercise! But building snowmen is not seen as exercise by overzealous policemen.

However, while some people are obsessing about children missing out on education, and the government is suggesting that extra classes should be arranged for the summer (after all, it’s unlikely that anyone will be going on holiday so the teachers will all be available!) experts are now saying that what the children need is a summer of playing out, running around with friends, especially being with their friends, and having fun.

I wonder who will win that battle.

Faced with news about things going on on the world of banking and Brexit, someone posted this in social media:

London looses its crown as financial capital to Amsterdam.”

Amidst all the political, sociological, whatever-other-ogical comments, there was this:

Goodness! And I thought it was just me who was distracted from the actual content of a message or statement because of a grammar or spelling problem!