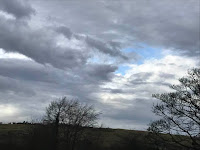 Today began dull, but fortunately not too damp. I was hoping we might have a repeat of yesterday, which transformed from a dull and rainy start into a bright and sunny blue sky day.

No such luck today; it has remained dull, after a very brief interlude when the sun tried to come through. It’s the wind that’s doing it.

So I’ve been spring cleaning instead of going out and about. As ever with spring cleaning, you reach a point where you almost wish you hadn’t started. Therefore I have taken a break to write this instead.

As the government has been busily congratulating itself on the latest bit of government by metaphor, aka the road map, Michael Rosen, of course, has been making his wry comments:-

Do you see me being magnificent in the House today? Gone are the days, O Achilles, when we used to chew over my performances back in Numero Ten. Luckily, I can rely on Starmer to fire paper arrows. I say, 'Schools will open' and they open.

In a few weeks, all being well, the roadmap tells me, I might make it to the hairdressers again. The same applies to Phil, who might be agitating for me to take scissors to his hair very soon. I have seen worse lockdown hair and I suspect that my (lack of) hairdressing skills could just make matters worse.

With the prospect of more people being out and about in the near future warnings about a possible increase in bike theft are appearing. More people have been cycling since the pandemic started but even so  last year there was a 16.3% drop in cycle theft. My guess is that this is because there has been more casual cycling but so far not much increase in people cycling to work and leaving their bikes locked up somewhere for most of the day. The main exception to last year’s drop in bike thefts has apparently been from key workers such as hospital staff - in other words, people cycling to work.

But the police are gearing up for theft prevention. Here’s a sample:-

“As restrictions lift, thefts are expected to rise, and police are trying to be ready when that happens, with a new national cycle crime partnership bringing together the UK’s major police forces.

“The government’s approach is to get more people cycling and walking, because obviously there’s benefits to the environment,” says Supt Mark Cleland, UK police national lead for cycle crime, who is leading the partnership.

This, he says, means “less cars on the road, it’s an environmentally friendly form of travel, it tackles health and fitness and obesity”.

“If somebody gets their bike stolen, the data suggests that they’re less likely to buy a bike again and actually that they might give up cycling. We want people to be active and look after the environment, so if crime is a blocker to that then we need to do something about it.

“My view on it is: if we tackle cycle crime then we’re saving lives and protecting the world.””

So all the effort I go to chain my bike to railings and those places people tie their dogs to outside shops is just me following good advice, even before it was given.