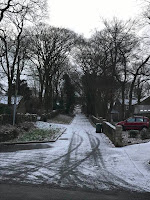 It’s snowing gently here, on and off, with very small snowflakes. I read in one of this morning’s papers that some schools were closed in Oldham because of snow. This is odd. As a rule, if it snows in Oldham then we have a fair old blizzard here in Delph but we don’t have enough snow to close anything and as a rule. Mind you, that’s how it’s been every time it’s snowed this winter. Friends in Chorlton and Stockport have several times had more snow than we did. 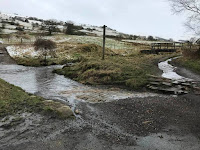 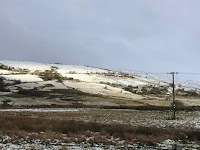 Not that I’m complaining. I’ve experienced snowy winters in the past and can manage quite well without them.

It is very cold, however. After slipping around yesterday morning, today I decided to walk rather than run when I looked out and saw white pavements. I seem to be turning into something of a fair-weather jogger! Still, better safe than sorry! I don’t fancy a trip to accident and emergency just now.

Between cold weather, the pandemic, a vaccine roll-out that is directing people to travel miles to get the vaccine (my sister is another example - she and her husband were told to go from Southport to St Helen’s - they contacted their GP and went somewhere local) and Brexit, life here continues to be crazy.

According to this article all sorts of industries are suffering from the “teething problems” of the Brexit deal.

The luxury children’s clothing brand is just one member of the UK’s £35bn fashion industry, which is warning that gaps in the Brexit trade deal could be devastating for businesses from retail and manufacturing to modelling and design talent.

Complex VAT charges and handling fees now in place have led shoppers in Europe to stop ordering or to reject deliveries. Some brands and retailers have ceased selling across the Channel because it is no longer profitable.

Veteran designer Katharine Hamnett warns “British brands will die” without a “radical overhaul” of customs arrangements with the EU, including VAT rules.”

Closer to home, our daughter knows someone who runs a sort of interior design shop in Uppermill. Most of her goods are imported from Sweden, where the owner, a Swedish national, returned to in that short time between lockdowns when travel was possible. Her children are able to go to school there and she has been running her business online. But now an item costing maybe £100 (yes, I know, a quite high price for a bit of interior decoration but there it is!) has an extra import charge, VAT charge, transport charge adding close to £50 on top! And so another enterprise will probably fold.

Meanwhile I notice all sorts of attempts to keep going. Cafes are still selling coffees and hot chocolate for outdoor consumption, leading to an increase in paper cups thrown away at the roadside by the way! Yesterday we spotted a sign outside one of the pubs in the area: “Breakfast served Friday, Saturday, Sunday, 10.00 til 1.00”. How are they managing that? It must be a take-away breakfast. For their sakes, I hope they have enough passing trade to keep them ticking over.

I am still reading Annie Proux’s Accordion Crimes. At the point I have currently reached the story relates the lives of the family of Octave, a sometime accordion player, a black man. His great great grandfather had been a slave. In 1955 his mother, Lamb, living in Bayou Féroce, Louisiana. “Lamb was working in the kitchen of a white college president’s house (permission to take home skin, fat, feet and heads of pot chickens, potato peelings and the heels of stale loaves) at five dollars and fifty cents a week.” So much for emancipation!

It’s a long time since I first read this book, first published in the mid 1990s I think. It’s amazing how the writer quietly points out the discrimination suffered by immigrants, Italian, Irish, German, Polish, at the hands of “Americans” at various times in history. So many in the land of the free must have forgotten that they were all immigrants on one time. She also documents how the “justice” system was always biased against the black community. One of her characters, in the 1970s now, was on hospital:-

“she read the paper: in Jackson Mississippi, a black man stopped for speeding was taken to jail and beaten dead, the coroner ruled a heart attack; on another page, forty black men had hanged themselves in Mississippi jails in six years; Mr Bill Simpson, forced out of Vidor, Texas, back to Beaumont, was shot dead within the week. So forth and so forth and so forth, the paper slid to the floor. It never stopped. Hadn’t they done something fine back in the sixties? Hadn’t people died getting the voting and civil rights laws? And since then, what?”

All this is related against the background of the tale of a small Italian accordeon making it’s way from place to place in the USA. But Annie Proux could be commenting on now, about a quarter of century further on in time.