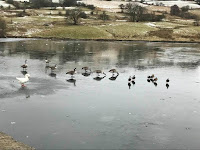 Well, the weathermen might say that the weather is getting “warmer” - surely that should be “less cold” or even “slightly less cold” - but the fact remains that the wind out there his morning was icy. Not only that but the ducks and geese were still skating on the millpond. 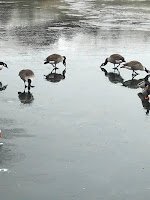 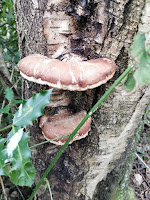 Our eldest granddaughter has also been out and about this morning, walking her dog and quite obsessively sending photos of fungi. I also take photos of interesting fungus but I don’t think I have ever posted 30 pictures of them in one go. 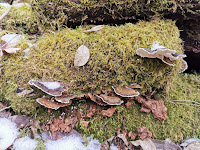 Our government has been congratulating itself on the success of the vaccination programme. Experts tell us that we can’t really consider ourselves safe until all the world has been vaccinated. Maybe we should send any spare supplies we have to poorer countries.

Meanwhile there is this report from Brazil:-

“Medical teams working to immunise Brazil’s remote indigenous villages against the coronavirus have encountered fierce resistance in some communities where evangelical missionaries are stoking fears of the vaccine, say tribal leaders and advocates.

On the São Francisco reservation in the state of Amazonas, Jamamadi villagers sent health workers packing with bows and arrows when they visited by helicopter this month, said Claudemir da Silva, an Apurinã leader representing indigenous communities on the Purus river, a tributary of the Xingú.

“It’s not happening in all villages, just in those that have missionaries or evangelical chapels where pastors are convincing the people not to receive the vaccine, that they will turn into an alligator and other crazy ideas,” he said by phone.”

We tend to forget that there are still remote corners of the world where people continue to live a primitive lifestyle. But how sad that the evangelicals have such power over them, really exploiting that primitive life style.

What’s more, I read this morning that admiral Horatio Nelson wrote to Lady Hamilton urging her to have their baby daughter vaccinated against smallpox! This was 220 years ago and the procedure was very new! How enlightened of the admiral! And how amazing that all this time on we still have people questioning the value of being vaccinated!

Really I should stop being surprised at such things. So many reasonable suggestions are argued against on odd grounds. There is a lot of discussion currently about a “vaccination passport”, which might turn out to be absolutely necessary as this virus and its variants don’t look as if they plan to disappear any time soon. Much of the discussion centres on the form any kind of proof of vaccination might take. So far we have only a flimsy little card, the size of a bank card, which wouldn’t stand up to much travel. Should we have something more permanent? Many people seem afraid that having such a thing might lead to ID cards “by the back door”. I’ve never understood the fear of ID cards which would make life so much easier as regards things like opening bank accounts or making any kind of arrangement that needs proof of identity. And yet the opponents of ID cards continue to blather on about our being controlled. Such a fear does not prevent most of them carrying mobile phones which can reveal our whereabouts and let advertisers know what kind of good to target us with. Big Brother is already watching us!

As regards the vaccine, the R-rate, the apparent downward progress of the virus and the demands for relaxation of restrictions, I find myself in the odd situation of agreeing with Dominic Raab when he says we should go cautiously. We’ve got this far and I don’t want any backward steps. There are people complaining that the current lockdown has lasted five weeks - they should live in Greater Manchester where it has effectively lasted since the end of July! Step by cautious step, say I, even if it means I have to agree with a Tory!