Out and about. Study and work techniques. Weather patterns. 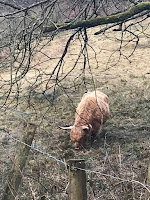 For what feels like the first time in weeks I got on my bike this morning and cycled to Uppermill. No rain! No ice! No snow! Not too much mud! Some deepish puddles! An impressive beast in the field at the side of the Donkey Line! And on my way back, young boys on bikes doing daring jumps over the ramp I wheel my bike down! Much braver than I am ... or perhaps just young and foolish!

Uppermill was fairly quiet, the market still restricted to three stalls - fruit and veg; cheese and biscuits; fish. The fishman seemed to be doing a roaring trade with an enormous queue waiting socially distanced half way down the street.

The good news is burying the bad. It's all wall to wall vaccine and that bloomin' death toll is finally off the front pages. Result for Bojo, or what, dear boy? I'm coming out of this morass smelling of roses and lashings of Chanel No 5.

And here is a quote from Mr Johnson himself.

“The government should be guided by data not dates”.

Well, I didn’t actually hear him say it but the radio news says that’s what he said. A bit of common sense. We shall see what happens.

Scotland is starting to open schools next week, but only to the very youngest, and a few older groups who need to complete practical work. Here in England they are still aiming for March 8th. The general impression seems to be that this is the right way to go about “opening up” our society. Once again, we shall see.

In the meantime, young people continue to study at home and advice abounds for those who are preparing for exams or assessments of one mind or another. This article tells how some young people are watching others study as a kind of self-motivation. It’s called “gongbang” and comes from Korea. Gongbang is a portmanteau of gongbu bangsong, the Korean for “study broadcast”.

In another of these advice columns I came across the “pomodoro technique”. We are all capable of multi-tasking to a greater or lesser degree but apparently it is not good when you want to really learn something. The brain really needs to focus. Enter the Pomodoro technique – do nothing but your chosen task for 15, 20 or 30 minutes, followed by a break of five, 10 or 15 minutes, where you can do whatever you like. If you’re struggling, start by trying five minutes of uninterrupted work, followed by a five-minute break, three times during the day. Then increase those focused work intervals to 10 minutes, 15 minutes and so on.

Now, I know that “pomodoro” is Italian for “tomato” so why is this study technique so called. I went to the Internet for information. It turns out that the technique was developed by Franceso Cirillo in the 1980s when he was a university student. He used a tomato-shaped kitchen timer to measure the time spent on each stage and ... voilà! his method had a name. I suppose he could have called it the Cirillo technique. Maybe he does not have a large ego.

The little-by-little method is applied to all sorts of things. There is an exercise technique for introducing people to running, called something like Couch to 5K, which involves initially running 100 metre and then walking 100 metre throughout your exercise session. Gradually the running is increased and the walking decreased until you run the whole distance! Hurrah!

As the weather here becomes milder, parts of the USA are now experiencing unusually cold and wintry conditions. Apparently this is a consequence of global warming, which sounds a little,like a contradiction in terms. But it’s all to do with the ocean warming up and this forcing cold air from the Arctic to move further south than usual. Here we are again, messing up the planet!

Here in the UK, and I suspect in other bits of Europe, log burning stoves have become very fashionable. According to this article these wood burning stoves are contributing hugely to pollution. It might be better to burn dry logs rather than wet logs but either way we need to reduce our use of polluting materials, no matter how attractive a log fire might be. Such a shame but there it is.

Life goes on. Stay safe and well, everyone