Pancakes. Home schooling for the wealthy. Light at the end of the tunnel. Signs of spring.

It’s Pancake Tuesday, more properly called Shrove Tuesday. Supposedly it’s a day for eating up all the stuff you’re meant to give up for Lent. I’ve not discovered why they bury sardine in Spain.mDoes it mean nobody eats sardines during Lent? But then I never quite understood why we supposedly only eat pancakes on Pancake Tuesday. A friend of mine posted on social media the other day that for her the best thing about Valentine’s Day is that it means Pancake Day is approaching. I resisted the temptation to tell her that it’s okay to eat pancakes all year round.

When our daughter’s middle two offspring were still at primary school she used to drop them off at my house in the morning while she went off to work or study. I would take them to school on the bus (quite an experience as it was always packed with the local comprehensive school pupils: noisy, pushy, mostly cheerful and friendly but occasionally rude and inconsiderate) and then collect them at the end of the school day. Before we set off in the morning they needed breakfast and we rapidly got into the habit of having pancakes: with lemon and sugar or occasionally with maple syrup (a foreign import of an idea of ever there was one) for the grandson but just with sugar for his sister. She has always had odd tastes!

After breakfast we had ten minutes of madness, playing tag round the large kitchen table. And eventually, somewhat reluctantly, coats were donned and we set off for the bus stop, always with some trepidation as the buses were known to come early as well as late and only rarely on time. So it was always a relief to find people waiting at the stop.

That was years ago now. The pancake-eating, tag-playing little kids are doing GCSEs and A-Levels this year. Well, they will do them in one form or another depending on government decisions.

At the moment I just watch the buses go past, mostly empty or with two or three socially distanced, masked passengers.

All of that might change on March 8th when schools are due to be open again ... possibly! ... maybe! Our daughter’s class of 8 year olds keep telling her during online lessons that they expect to be back then. From time to time she hears a fraught parent in the background, clearly hoping that they can stop struggling with home schooling at that point. Our daughter would also like her classroom, and her workload!, to get back to normal but she’s waiting to see how things go.

Apparently those who can afford to do so are increasingly solving the problem of home schooling by employing a governess. Governesses are no longer the unmarried daughters of genteel families down on their luck that we have seen portrayed in novels, second class citizens in the families they work for. They are now trained teachers and can command pretty good salaries, which is why this is the preserve of the wealthy. They are teaching the offspring of the rich and sometime famous, organising leisure activities but not dealing with bath-time and bedtime and mealtimes. They may not have job security but they might not be working as hard as the state school teachers who are juggling online teaching and face to face teaching with those children who have to be in school at the moment.

The radio news tells me that there is evidence that the vaccination programme is working. They are seeing an increase in antibodies, ready and waiting to combat the virus, in the over-80s. So there is hope that there will be a good outcome to this programme. But the message is that we need to keep our distance and wear our masks. A glimmer of light at the end of the tunnel though. 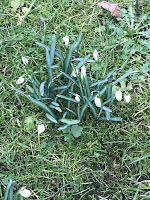 And there are signs of spring around the corner.

My snowdrops are blooming nicely. 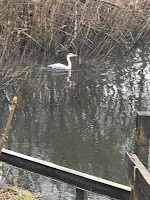 The heron is back in the watery places around my running route.

I am not sure if that is particularly a sign of spring but it’s good to see him around again. 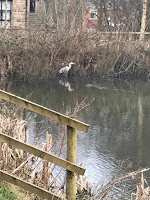 And in places like Amsterdam, where they have been happily skating on frozen canals, warnings are out that the ice is thawing and that more skaters are falling through the ice. I was surprised to see some of them skating in swimming trunks! It’s February after all! But maybe they are simply being prepared for falling into the canal. Their easy exit from the canals after skating on thin ice suggests to me that those who tell me that canals are not very deep must be correct. I always imagined them to be quite deep and am always careful when I cycle on the towpaths in our area, just in case, but apparently this is not so.