Out and about in the arctic weather.

It’s been very cold for the last week or so at least. It’s forecast to continue so until Sunday, when we might see an amazing high of 5 degrees! The snow has been very fine stuff, very small flakes, probably no good for making snowballs, but it has covered the ground quite effectively. Ot hasn’t snowed consistently either. In between snow showers the weather has been bright and crisp and clear.

On Monday we did not take advantage of the good weather because I had a zoom Italian conversation class in the afternoon. We should have gone out earlier in the day. There was nothing to stop Phil going out on his own of course, but that didn’t happen. 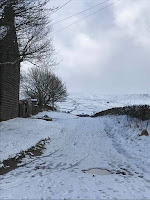 On Tuesday we decided to tackle the quarry road, up Lark Hill. And as the ground was pretty much frozen we continued on our traditional route without fear of sinking into a muddy mess on the paths. It was a cold walk but well worth it. The hills were looking particularly spectacular. 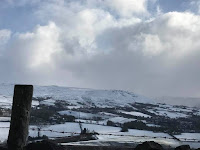 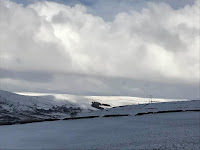 Yesterday, Wednesday, my daughter had arranged for the small people to come and spend the morning here. They don’t have nursery places on Wednesday and usually spend the morning with Daddy, who doesn’t start his work from home until just after midday, by which time Mummy returns to take over. Every few weeks, though, he has to take an early shift on a Wednesday and so the small people come to me. This week, however, the four and half year old has been unable to go to nursery as her age group room has had to close because a staff member has tested positive for Covid. So all the children from that group have to isolate. It’s not a major problem in e case of our four and a half year old as she is very good at entertaining herself, and there are adults, well Daddy and teenage siblings, around to ensure her safety. She’s just a little confused as to why she can’t go for walks. Her almost eighteen month old brother, who needs a lot more attention and entertainment, has been able to continue to go to nursery. So yesterday he came here alone while his sister stayed at home. 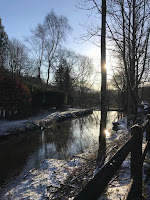 And my trip to Uppermill market became a walk with the baby buggy. Had his big sister been here we might not have done it. She’s a good walker but Uppermill and back is a long way for small legs and ai might have ended up with a baby in the buggy, shopping under the buggy and a quite  large sister on the buggy board - rather a load to push along the track!

So the little fella and I set off before 9.00, stopping occasionally for photos of the morning light on the river. 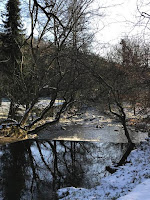 We sorted the shopping and made our way back along the Donkey Line, where the puddles had all frozen and were covered in snow. 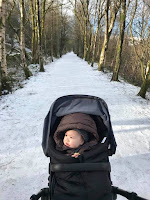 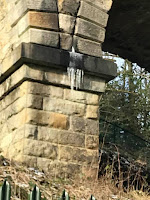 There were icicles hanging from the viaduct. 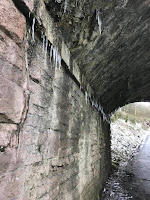 But most impressive were the tunnels among the Donkey Line.

These tunnels have provided me with some fine photos over the years but now they were like ice grottos, with icicles hanging like stalactites from the roof. Splendid stuff! 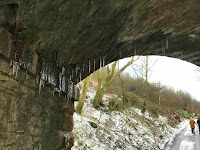 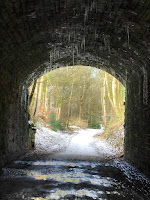 My poor Fitbit has been very confused by my pram pushing and didn’t seem to know how to count my steps. I have commented before that it considers my cycling to and from Uppermill to be a much shorter distance than when I walk. Well, clearly it thought some of my pram pushing was cycling (it has done that before now, categorising my walk as a cycle ride) but not all of it. How does it know? Is it something to do with the lack of arm movement?  Poor confused little device.

Later in the day the blue sky disappeared for a while and the snow came back, but not for long. Very odd weather!