Sunny days. Weathermen. A bit of a rant about education and assessment at the moment. 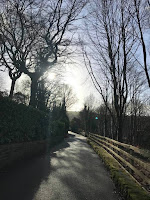 I ran in the sunshine this morning. After a little discussion with myself I decided I would put my beanie hat on but leave my gloves at home, for the first time in a while. I probably should have put my gloves on as well as the air was quite chilly but it was a good morning to be out and about. Maybe we’ll take a walk up Lark Hill later. As the weatherman promises us another fine day tomorrow we have a chippy hike planned with my brother-in-law.

Our current favourite weatherman, the delightful, delightfully camp and ever so dapper Owain Wyn Evans, surprised us last night by appearing on the North West news in a different capacity, interviewing LBGQT people in the region. So I suspect that he’ll be moving on to other things in the field of broadcasting before we know it. He looks terribly young when you see him doing his weather forecast in one of his seemingly endless array of three-piece suits in a range of often pastel colours, but when you look him up on internet it turns out he’s well into his 30s. Okay, yes, still terribly young! He’s been broadcasting since he was 18, doing Welsh language children’s news programmes and last year joined Carol Vorderman a tour across Wales where he taught her to speak the Welsh language for the S4C TV programme Iaith ar Daith. He’s clearLy a young man of many talents - also famous for his drumming! There you go.

Having watched on Netflix last night an episode of Dix Pour Cent, the French comedy series known here as Call my Agent, and then caught the weather forecast on BBC North West Tonight for a bit more light entertainment, we turned to BBC 2’s Newsnight for more serious stuff to finish the evening off. Emily Maitlis began by shouting at us about the importance of helping children catch up with all the schooling they have missed. I suppose shouting was one way of emphasising the importance. This was by way of an introduction to a discussion with Dr Mary Bousted, joint secretary of the teachers’ union the NEU and Sir Michael Wilshaw, formerly Chief Inspector of Schools and head of Ofsted from 2012 to 2016.

Michael Wilshaw expressed the opinion that teachers need to take an example from the NHS staff and “go the extra mile” by stepping up to offer extra classes through the summer holiday and beyond. Weekend classes could be a good idea too. We sat on the sofa shouting at the TV set! Mary Bousted very calmly pointed out that teachers have always worked weekends; that’s when most of the marking and preparation takes place. As for going the extra mile, that is what has been happening with teachers giving face to face classes to vulnerable children and children of key workers while simultaneously giving online lessons to the rest of their class. Michael Wilshaw tried to butt in and was calmly asked by Mary Bousted not to interrupt. Allowed to speak once more, he put his inspector hat on and declared that examination would show that some schools had not been going the extra mile. Hmmm! Mary Bousted calmly rebuffed his criticisms. She came across very well but then, she is a Northern woman!

This discussion was held because Boris Johnson has appointed a new “catch-up” tsar who will run a task force to oversee plans for children to have one-to-one tuition and summer schools. This is another Knight of the Realm, Sir Kevan Collins. I looked him up on the internet as well:-

Well, at least he has some classroom experience, about 7 years in state schools and then climbing the promotion ladders to end up with a knighthood. And he talked the talk so I’ll reserve judgement for the time being. It’s just that I know an awful lot of people whose services to education have been many more years of delivering education to those children who now need to do some catching up. And they have not been given knighthoods.

And now on the radio news they are discussing what to do with the exams, or rather non-exams, worrying about how to root out “malpractice” as teachers award grades. All the years of teachers coming together to standardise assessment of work seem to have been forgotten. And we shouting at the radio about classroom teachers not being trusted. Oh, boy! Rant over!