Out and about here and there. Spring. Exams. Religious festivals. And a bit of Spain’s past revealed. 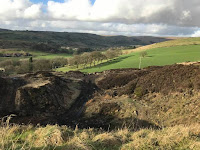 Yesterday we did go up Lark Hill, as I thought we might. Half way up we decided to investigate what remains of the old quarry.

We have been intrigued by all the signs of activity but it’s always been either too muddy and wet or the path has seemed too steep and messy for us to go and investigate. 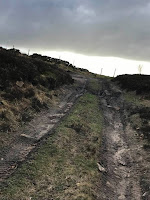 Yesterday it was relatively dry and so we went to have a look. It was obvious that huge slabs of stone had been placed at the top of the path at one point and in a couple of other places.

Quite what the purpose of all this activity was remains a mystery. Perhaps someone wants to stop trail bikers and quad bike riders from going up and down the slopes. Who knows? We are none the wiser for having looked. 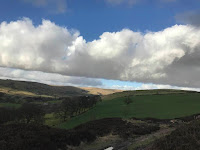 We had to do a bit of ducking and weaving, in and out of barbed wire, to make our way back to the path.

The views from the top were pretty spectacular, with some interesting winter sky. 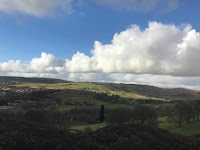 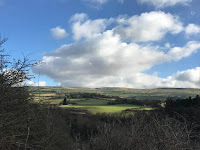 Today we did a probably still illegal family chippy hike - a walk to Diggle in the sunshine and a walk back under clouds.

No rain though, which is always good! 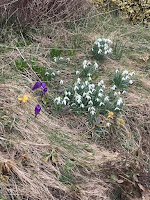 There were signs of spring all over the place. 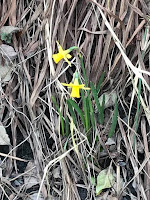 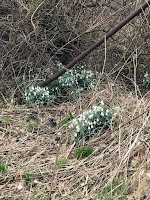 Our middle granddaughter was telling us during our hike how pleased she is that her teachers will be assessing her for her A Level courses. She’s basically had something like half a year of her AS year in college and will maybe have had half her A Level year in college. So it’s been a funny experience of sixth form life. She’s just asked the universities that have offered her places on courses to let her defer entry for a year. In that way she hopes that maybe things will have calmed down by the time she heads off to wherever she goes in October 2022. And maybe ... just maybe ... she can find some kind of employment and save some money before then. We shall see.

Here is one of Michael Rosen’s "comments" on the exams decision:-

For years Gibb et al have been banging on about how exams are fairer than teacher assessment, and now I'm telling the bloody masses that teachers doing it is fair. What if it is fair? It'll stymie us for beating the drums for exams next year.

And here’s a little something from “Have I Got News For You”:

“As Gavin Williamson reveals grades will be decided by teachers, experts warn it could result in people ending up in jobs they are not remotely qualified for, such as Secretary of State for Education.”

Meanwhile, I came across this link to some pictures of the Jewish festival of Purim, which has gone ahead in Israel with a curfew, trying to keep it as Covid-free and Covid-safe as possible. Looking at people dressed up and dancing on the street and sharing food, I am reminded of Carnival. No doubt people who study comparative religions could tell me if there is any shared connection.

On the subject of things Jewish, here is a link to an article about a bar in Utrera, Andalucia, Spain, where renovations led to archaeologists being called in to investigate what might once have been a medieval synagogue.

The Catholic Monarchs, Ferdinand and Isabella, expelled the Jews from Spain in 1492. In that same year the Hospital de la Misericordia was founded, possible using the old synagogue itself. In 1604 a local,priest, historian and poet, Rodrigo Caro, described an area in the centre of Utrera: “In that place, there were only foreign and Jewish people … who had their synagogue where the Hospital de la Misericordia now stands.” Since then it’s been a home for abandoned children, a restaurant and more recently a bar, all the while hiding a bit of Spanish history. Spain is a fascinating place both on the surface and below the surface - buts of history pop up all over!