The things you see out and about!

Out running this morning, I was cheered on by passers-by, one a woman who smiled broadly and said something incomprehensible in Gallego. Usually I can have a good go at understanding the local dialect - and, yes, I know that I will offend some purists by calling it a dialect - but this time I did not catch a word of it. The other was a gentleman - well, a man, anyway, if not very gentlemanly - who laughed and told me I did not have far to go now. This was a bit of an exaggeration as I was still at the bottom of the hill!

Later, after I had run round the back roads, past the allotment (where one of the goats, by the way, appears to be pregnant, or is maybe just fat) and was back onto the main road, my progress was impeded by a school party. I stopped at the point on the street where the pavement is narrowed because of scaffolding and allowed about sixty small people, walking in twos hand in hand, make their way past me. The accompanying teacher thanked me, which is quite unusual for Spain.

This must have been a private school as all the children were dressed in a quite repulsive brown and mustard-yellow uniform. Maybe the colours work for older pupils in the school, secondary age girls wearing smart kilts, for instance, but on the under-sevens it looked rather miserable. I think I recognised one of them as little podgy Brian from our swimming pool. Brown and mustard are not his colours, I must say!

Still, I’m glad the little ones were being being taken out. Maybe it was an end of term treat. Schools here close for the summer at the end of this week I think. It crossed my mind that perhaps primary schools here are not as rigidly held to a national curriculum as in the UK and thus can afford the flexibility of taking the little ones out on what we used to call “nature walks” when I was that age. Basically it was an excuse for the teachers to take the pupils out of school into the fresh air on a fine day, not an easy thing to do on a snap decision nowadays in British primary schools. It takes too long to fill in the requisite health and safety forms, which usually have to be submitted at least a week before the proposed outing. 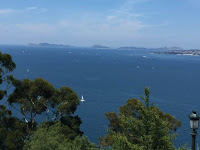 Yesterday we walked up to the top of A Guía and admired the view from the chapel. We were not impressed by the group of people in the carpark who had set up speakers in the boot of one of their cars and were blasting out not very tasteful music for all the world to share. They didn’t even appear to be having an organised party, just a bunch of people standing around doing nothing. Of course, it’s quite possible that they were waiting for others to arrive. Or they could have been the tail end, the last hangers-on from something already over, a more likely prospect judging by the stream of cars we saw descending as we walked up the road to the top.

We walked back down through the A Guía park, the oak tree park as they seem to be calling it now. We noticed a number of obviously newly planted trees, all in little enclosures to prevent them from escaping or to prevent woodland creatures from attacking them. A little further on we found a notice, the writing tastefully burnt into a tastefully shaped piece of wood, not so tastefully tacked to a fence post. This told us that the children of one of the Teis primary schools had come out one day in February and planted oak saplings in order to keep the oak tree park going. What a brilliant idea, maybe inspired by young Greta, the teenage echo-warrior, to do something for the environment.

I had to stoop to read the notice which was pinned at a height best accessible to children too small to be able to read with any proficiency. I suppose it made the children feel involved though. Some concessions have to be made for small people who have almost certainly been made to walk in twos hand in hand in a crocodile through the streets of their district.

The notice was in Gallego and began thus, “Os nenos e as nenas de Teis ...” - “the boys and girls of Teis ...”. Now, not so long ago such a notice would have begun simply with “Os nenos de Teis”, taking it as read that the masculine plural included all children, male and female. This has always been the case until now. A group of 1,000 children could be made up of 999 girls and 1 boy and would be referred to in the masculine. It’s a linguistic matter, not a sociological one. Nowadays, however, equality demands that the girls get a separate mention. Similarly letters to parents, formerly beginning “Queridos padres” now have to start with “Queridos padrs y queridas madres”. I despair! All those years I spent as a teacher of Modern Foreign Languages explaining to students that labelling words “masculine” and “feminine” had nothing to do with actual gender! It’s just a lot easier than saying “words that used “el” for “the” and “un” for “a” or words that use “la” for “the”and “una” for “a””. A handy label, that’s all! And the along comes equality-gone-mad!

Okay! That’s another little rant over and done with! 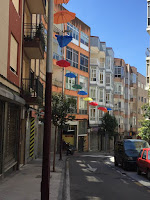 As we made our way through Teis itself, heading for home, I noticed that the streets were festooned with umbrellas. Umbrellas, that is to say, suspended at intervals from ropes or cables above the street, instead of more conventional bunting. Maybe it was to celebrate the feast of Saint Umbrella. There were several notices telling us that “O comercio de Teis da vida ao barrio” - “Teis commerce livens up the district” but I have yet to find a truly satisfactory explanation for the phenomenon. 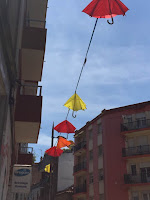 I posted a picture on Facebook which has so far earned only the comment from a Vigo-residing friend “Oh, so you managed to see them”.

A fine comment in its way but not very enlightening.
Posted by Anthea at 11:45