Sicilian Adventures at the Seaside!

Today we went to the seaside. Our Italian friend and teacher taught us a song for the seaside, all about showing off your white buttocks:-

So we taught her “I do like to be beside the seaside” in return. 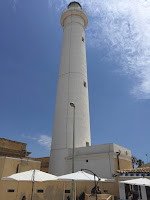 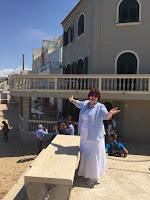 More specifically we went to Punta Secca, where there is a house which they use as the home of Salvo Montalbano in the TV series. Had we gone there yesterday we might have seen them filming the series. Had we gone to Scicli two or three days ago instead of yesterday we could have seen them filming there as well. Mind you, we might not have got onto the set in either case. So we could have felt quite frustrated and probably would not have seen as many interesting things. 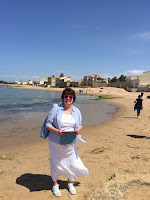 And besides, yesterday the weather was not so good as today for going to the seaside. So we all took pictures of each other standing near Montalbano’s house. Since the last time we visited, five years back, the place has tarted itself up a little for the tourists. There is a plaque on the wall of Montalbano”s house. It may be possible to go and stay there, no doubt at an extortionate price.

Some of our party stripped off, well down their swimsuits and swimming trunks, and went in the sea. The disrobing in the cafe quite shocked some others in our group, who felt that pale British skin really should bot be displayed on cafe terrace. The act of going in the sea shocked and worried the Italian in our group as they thought it was too early in the year to be in the sea. There were, however, quite few other brave (or foolhardy, depending on your point of view) folk in the water.

As for me, I just went and bought me a summer dress for the grand total of 12 Euros from a stall in the square.

Punta Secca is a nice spot to wander about in and the beaches are fine.

When the swimmers had dried off and made themselves decent we walked along the promenade to a restaurant used in the TV series. Trading in on the popularity of the series, they have a dish called “Commissario” something or other - the most expensive item on the list! We did not choose that but were all quite sensible.

I had something with sardines and Phil opted for linguine with shellfish. 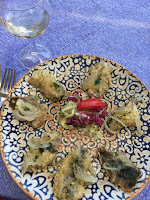 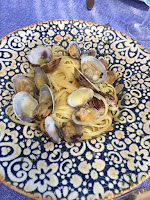 Dessert we put off until we had moved to Marina de Ragusa - a more economical move. Phil, however, made up for this by having the biggest ice cream possible while I had a more sensibly-sized “granata di mandorla” - a sort of almond flavoured slush. 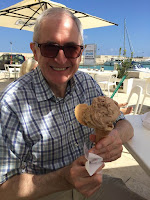 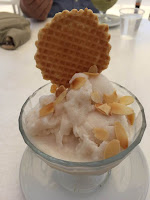 There was some nice street art to admire! 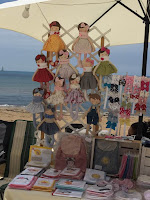 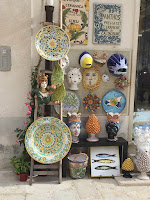 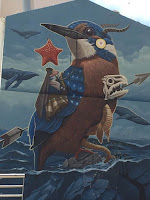 And finally I got my feet in the sea!

Tonight we head for Ragusa Ibla, where we will hear a piano concert, probably while we eat. Certain people, though, want to find a bar where they can watch football. Some people are never satisfied!
Posted by Anthea at 09:01