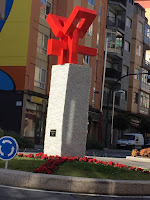 On the roundabout at our end of the street, previously unadorned, a bit of street art has appeared. Vaguely reminiscent of the work of the Basque sculptor Chillida, it could also be influenced by Lego or the much praised children’s computer game, Minecraft. I remain unsure as to how much of an improvement it is to the street but I assume it has appeared in line with the smart new pavements. 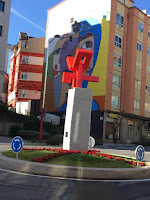 The sun has been shining although the temperatures remain in the mid-teens rather than moving onto the mid-twenties that you might expect for June. After all, the summer solstice is approaching and after that it will be all downhill as the days start to grow shorter again. However, avoiding pessimism we must remember that it is still officially summer. The sailing schools heve been out in the bay and the Sunday cyclists were out in force. Which reminds me, it must be almost Tour de France time again,

Here’s a report about one cyclist who will not be doing the Tour this year:-

“Chris Froome has admitted he is lucky to be alive after speaking for the first time since his horror cycling accident. The four-time Tour de France winner came off his bike and hit a wall at 37 mph on Wednesday while examining a time-trial stage route in the Critérium de Dauphiné. He sustained multiple fractures, including a broken leg, elbow and several ribs, requiring extensive surgery. It has been also been reported that Froome suffered a fractured neck, faces six weeks in hospital and is not expected to compete again this year.

“I know how lucky I am to be here today and how much I owe to all the paramedics and medical staff on the race,” said Froome. “Whilst this is a setback and a major one at that, I am focusing on looking forward. There is a long road to recovery ahead, but that recovery starts now and I am fully focused on returning back to my best.”

The post was issued with a picture of Froome giving the thumbs up from his bed at the University Hospital of St Etienne, where he has been receiving treatment.”

Back in the UK rain seems to have continued. At least in Greater Manchester. A friend of mine has been bemoaning the fact that a torrential downpour started just as she finished cleaning her windows. Which just shows how much if a waste of time cleaning windows really is. We missed the Saddleworth Brass Band Contest last Friday. Judging by various photos I have seen the day managed to remain reasonably dry even if the sun failed to emerge properly. My daughter tells me it has rained on and off since then.

But it could be worse. People have been evacuated from their homes in Lincolnshire because of sever flooding. We got out just in time it seems!

At the end of this week we relocate to Sanxenxo where I say once again that I expect some decent weather so that I can make use of the fine pool while Phil plays chess.

As we will be staying in the tournament venue hotel, we will have to adhere to their breakfast times rather than the lackadaisical come-day-go-day regime we follow on our own. This means that we need to ensure this week that the chess player gradually adapts his regime, going to bed earlier and getting up earlier. He tells me that you cannot teach an old dog new tricks but according to this article   it is quite possible for night owls to become more like the annoying larks such as myself.