The weathermen were right: a lot of rain has come sweeping up towards our end of the country. The sound of the rain on the roof and against the windows did rather but me off running this morning. So I switched off the alarm, planning to get up shortly and walk into the village instead. I woke up almost an hour later. Obviously, as my mother would have told me had she still been around, I needed the extra sleep. 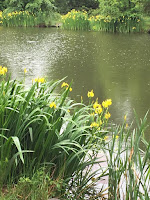 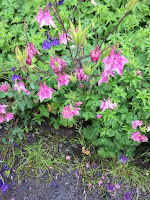 By the time I got myself organised, the torrential rain had turned to drizzle. I suppose I could still have run but by then my plans had changed. The rain did not prevent me from taking pictures of the flowers around here en route to the coop for the newspaper. 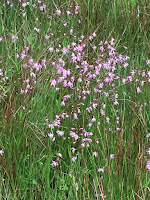 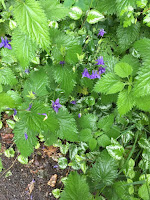 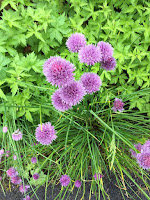 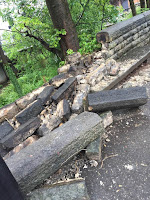 I went out again later to catch the bus to the nearest supermarket and found a wall fallen down near the corner where the bus stops. It was fine the last time I walked past. It clearly was not the result of a car mounting the pavement as that would have caused the stones to fall into the river. Maybe the wall just gave way under the weight of water falling from the sky.

Talking to several of my nodding acquaintances on the bus, I discovered that they were on their way to school fêtes that their children were involved in today. So this is the season of school fêtes. Which explains the rain! In addition to that, next Friday is Whit Friday, Band Contest Day in Saddleworth, when brass bands from around the country, indeed from around the world, go from village to village and march in playing their music, hoping to win a prize. It’s the closest thing we have to a fiesta and on a fine day it is quote spectacular. On a wet day it is still pretty impressive but sunshine is best. Unfortunately I cannot remember the last time we had a really warm and sunny Whit Friday.

Are we all delusional, thinking that we can organise outdoor events in June?

Also delusional seems to be Donald Trump. First of all he said he was very popular in England and had seen no demonstrations against his visit. He must have looked in the wrong places. He has also boasted about having “automatic chemistry” with the Queen during his state visit here. He apparently told Fox News that people had noticed how well he and the Queen had connected. He said: “The meeting with the Queen was incredible. I think I can say I really got to know her because I sat with her many times and we had automatic chemistry, you will understand that feeling. It’s a good feeling. But she’s a spectacular woman.”

He seemed to think the queen enjoyed herself too. “There are those that say they have never seen the Queen have a better time, a more animated time. We had a period we were talking solid straight, I didn’t even know who the other people at the table were, never spoke to them. We just had a great time together.” Trump, when asked if he would keep the conversation going, added: “Yes I am, she is a spectacular woman, an incredible woman.”

He must not have seen the cartoons of the queen peering from behind the curtains and asking Prince Philip to tell POTUS she is not at home!

Meanwhile the struggle to find a new leader for the Conservative party continues. Today brings a fresh bit of scandal. Michael Gove says he regrets taking cocaine. A more unlikely person to be in involved in drug taking I cannot imagine. I can, however, think of decisions he should regret having taken in his political career! We might never forgive him for those "fronted adverbials" - and that's the least of it.

Maybe he too is delusional!
Posted by Anthea at 07:34