Pride - in language and nationality. And taking the heat.

An article in yesterday’s Voz de Galicia deplores the fact that the president of the Instituto Camões, Luis Faro Ramis, stated that Galician and Portuguese are not the same language. Shock! Horror! The writer, María Pilar García Negro goes into a bit of history, remembering a time when there was no border between Galicia and Portugal, and the language spreading North to South.

The original language was, of course, Galician. As she put it, the “daughter” Portuguese flourished while the “mother” galicia withered and almost died. Oh the hurt pride! And not a mention of the fact that they all come from Latin in the first place!!

And then there’s this. According to the Bloomberg Healthiest Country Index, whatever that is, Spain is now officially the healthiest country in the world, gone up 6 places in the last 2 years and knocked Italy off the top. It’s the food that does it. Whoever does the research for this has clearly never seen young Spanish chess players having a very healthy merienda-snack of do-nuts, biscuits and pastries of one kind or another.

Royal watchers seem to be the same the world over - full of criticism. La princesa Leonor, eldest child of King Felipe, heir to the Spanish throne, is criticised by journalist Sandra Faginas because at the age of thirteen, fourteen in October, the poor child is dressed like a six year old for offical occasions. Who is to blame ? La reina Letizia of course, who “desde siempre ha supervisado escrupulosamente los ‘looks’ decsus hijas.” Oh, it’s a hard life! I suspect that if young Leonor was dressed in a really trendy manner, then Letizia would get it in the neck for that as well. And no doubt Leonor is already trained to conform. It’s what heirs to the throne usually do. You probably have to be the spare, like our own Harry, to kick over the traces a little. Just think of Princess Margaret!

I hear that the UK is about to have a heatwave. It’s also promised for much of Spain.

A friend from many chess tournaments here in Sanxenxo arrived yesterday, late. He did the same last year. I think he had commitments elsewhere and so took a bye on the first two rounds. He comes from Asturias where, his wife informed me in the bar yesterday evening, the weather had been disgustingly wet and cold - rather like Greater Manchester before we left. She is hoping that the heatwave will hit here as well as the south. 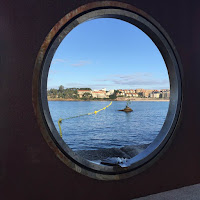 Today is fine and sunny. La Madama continues to reign over the bay. 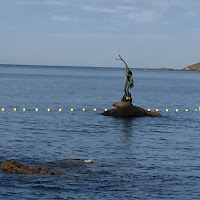 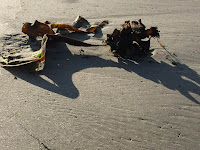 The sea throws up interesting bits of seaweed. I have to catch the pictures before the early morning tractor cleans up most of the detritus from the beach, ready for the day.


And finally, here is what seems to be a French rogue apostrophe on a baker’s shop on the seafront. 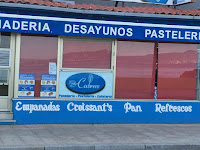 None of the Spanish plurals sport apostrophes - only the croissants!
Posted by Anthea at 02:47